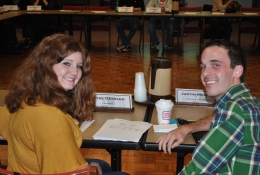 Members of the Youngstown State University Student Government Association agreed that academic advising on campus must be improved, and several ideas were discussed during the organization’s meeting on Monday.

SGA President Elyse Gessler said the challenges involved with academic advising would be one of the focal points for SGA in the spring.

“I think it’s really important for students to stay informed about their resources,” Gessler said. “One of the biggest advising issues deals with incoming freshmen and second-year students who may not know where to go for advising or whether or not they even need to be advised.”

“I would like to see more of a standardized advising process for students,” McIntyre said. “Sometimes students make ill-informed decisions on their own that could have been easily avoided with the help of an adviser.”

Susanne Miller, senior academic adviser for the Bitonte College of Health and Human Services, agreed that academic advising poses some daunting challenges and said students and advisers must work together.

“We are always trying to figure out what works best,” Miller said. “I think you would be hard-pressed to say there aren’t some issues that need to be addressed, but I am more optimistic than ever that we are going to continue to make the entire process easier for everyone.”

Miller said one of the biggest challenges involved with advising is the number of students who try to schedule appointments in such a short period of time.

“We have 4,000 students in Health and Human Services, and we try not to cut people short on the time we meet with them,” Miller said. “You can imagine the amount of time involved in the process.”

William Buckler, coordinator of academic advising, said his office has been exploring ways to relieve advisement stress on students and faculty.

“This issue is not limited to YSU’s campus,” Buckler said. “These issues are a challenge at most colleges across the country, but there are some creative ways we can try to help alleviate some stress.”

Buckler cited the new academic advising syllabus as one tool being used to emphasize that advising is a two-way street. The syllabus, which outlines many important facts about advising, will be distributed to all incoming freshmen.

“We are trying to make advising easier, but we also try to stress, that as a student, there are responsibilities that go along with advising,” Buckler said. “I would encourage students to schedule an appointment for advisement as early as possible and come prepared to ask questions. That alone can help alleviate a lot of headaches.”