“Help for today, hope for tomorrow.” These words echoed in the minds of community members last Wednesday.

Community members were jam-packed into the event room ready to hear a panel discussion about the prevention, education and fight against opioid drug-related abuse in the Mahoning Valley.

Panelists were also joined by guest speakers Nikki Campana of Struthers and Donald Slocum of Youngstown, who have previously struggled with addiction and are on the road to recovery. The community summit was moderated by channel 21 WFMJ news anchor Derek Steyer.

Opening statements from panel members included talks of prevention opportunities and outreach programs available to those struggling with addiction in the area.

During the event, Bergefurd said the state of Ohio has spent $23.7 million in prevention activities and $4.5 million on grant opportunities to help battle addiction.

Lt. Sutton said Mahoning County is tenth in the state for overdose deaths with over 1,200 deaths in 2017.

Meanwhile, Burney brought some laughter to the event with inspirational stories to showcase there is hope of a tomorrow for those struggling with addiction. 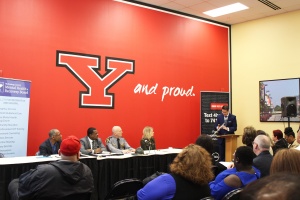 With him, he brought Slocum, who spoke of his journey down the dark path of addiction starting at the age of 18. He is currently on the road to recovery and getting his life back on track.

“When I decided to change myself and my ways, that’s when I realized there are resources, as well as helping hands, that are willing to help me up, but they aren’t going to pull me up by themselves, I have to pull with them,” Slocum said.

Another recovering addict also spoke during the summit. Campana discussed how she felt isolated during her addiction. During her time in detox, she said she wasn’t permitted to see her kids or her family. She said it was when she felt like she had no one that she then flipped the switch and decided to change her ways for herself and not just others.

After opening statements from the panel, the event transitioned to an anonymous question and answer session. One attendee in the crowd asked Dr. Kennedy when was the best time to introduce drug abuse education and prevention into schools.

Dr. Sitarik said he was once an addict himself and is currently in recovery.

“The diseased brain has a need to medicate. It may start as trauma, but I have a brain that is predisposed to it,” Dr. Sitarik said.

He said it does not matter how much trauma he had or if he has it or not.

“It doesn’t matter because I can’t stop despite that. It’s a primary disease of the brain. So, you can eliminate all of the trauma from the patient’s world and they would still have the need to self-medicate,” Dr. Sitarik said.

Another topic introduced was the Protecting Rights of Those Exploited by Coercive Trafficking (PROTECT) Act of 2018. The piece of legislation was introduced by Senators Rob Portman, Sherrod Brown, John Cornyn, Dianne Feinstein, Amy Klobuchar, Bill Nelson and Thom Tillis.

The bill aims to specify the utilization of prescription and illegal drugs as a way of coercion for victims to participate in human trafficking. The bill is also set up to hold traffickers accountable for aiding in the victim’s addiction for the purpose of trafficking.