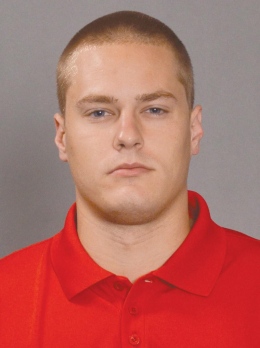 Schkurko said it was tough to ride the sidelines as the Penguins racked up half their total wins in those last five games.

“It was hard when we started playing well at the end of the season, and I just had to sit on the sidelines and watch,” Schkurko said.

In his junior year, Schkurko snapped every punt and field goal attempt. He was named the Hill, Barth and King special teams player of the game against the University of Northern Iowa. He also earned his third letter.

As a freshman and sophomore, he was named the HBK special teams player of the game three times. As a redshirt freshman, he was named to the Gateway Honor Roll.

During his football career, he also played for two head coaches. He said the transition between former head coach Jon Heacock and current coach Eric Wolford was a tough one, but it worked out.

“They were two completely opposite coaches,” Schkurko said. “It was just a matter of getting used to change. I definitely enjoyed my time playing football, though. I made some really good friendships.”

Schkurko said he had a great experience at YSU.

“I enjoyed my time here. I really learned a lot,” he said. “At times, it was hectic trying to balance both academics and athletics, but if you have a determination to do it, you will be able to.”

A civil and construction engineering technology major, Schkurko has plans for his post-college life.

“I plan on heading back home in the Cleveland area and getting an apartment up there,” Schkurko said. “I have a couple of offers out there, so I am not planning on staying in the Youngstown area.”

Schkurko said he wouldn’t do anything differently.

“I am pretty satisfied with the way everything went down,” Schkurko said. “I kind of feel that everything happens for a reason, so if I would have done anything differently, I might have not had some of the friendships I have now.”