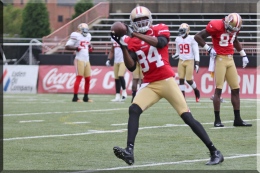 Randy Moss of the San Francisco 49ers catches a pass during practice at Stambaugh Stadium on Wednesday. The 49s made a stop in Youngstown to avoid a trip back home before their next game in New York on Sunday. Photo by Dustin Livesay/The Jambar.

Oh, and Randy Moss played rock-paper-scissors between repetitions at practice, as the 49ers began their usage of the Youngstown State University facilities for the second straight year.

“The facilities at [YSU] are excellent,” 49ers head coach Jim Harbaugh said. To prepare for the New York Jets on Sunday, the 49ers stayed on the East Coast after playing in Minnesota this past weekend. The goal is to avoid travel and switching time zones.

Last season, San Francisco used the tactic for games in Cincinnati, then Philadelphia. Also like last season, the 49ers will stay the week at the Holiday Inn in Boardman.

Smith said there are pros and cons to the situation.

“The cons would be you’re away from your family and stuff like that,” he said.

“But with that, there’s no distractions here. We all hang out with each other. And the meeting rooms are two floors up.”

Smith added that not much has changed from last year to this year.

“I have not noticed much difference to be honest,” he said. “There’s still the Longhorn [Steakhouse] across the street, Chic-fil-A, you know.”

Then again, San Francisco wouldn’t change a thing about its 2011 East Coast trip. After a win at Cincinnati, the 49ers defeated the Philadelphia Eagles, 24-23, the next week. San Francisco used the couple of games to propel themselves to an eventual 13-3 record.

Following the Philly win, Harbaugh commented, “Thanks, Youngstown, you’ve been good to us.”

“When they’re here, it brings national media attention to Youngstown,” he said. “The 49ers have nothing to say but good things about our campus and our city, and that gets pushed out nationally.”

“We talked some football,” Harbaugh said. “I congratulated them on their great start.”

Wolford said it was good to see Harbaugh, who he has known “for a while.”

“I got a chance to see him on the field and spend a little time with him,” Wolford said. “I think we see the game the same way. He’s a time of possession guy, likes to be physical on the ball. So, we have a lot of similarities.”

YSU quarterback Kurt Hess has not met with any of the pros yet. Among those he would like to meet, Hess mentioned Smith and Moss.

“I’ll probably still get starstruck when I see them,” Hess said. “It’s neat that they’re using our facilities to come in here and get their work done and go about their business like we do. I wish them nothing but the best.”