As a freshman in 2011, Ryan Krokos came to Youngstown State University to further his love of the game, baseball. Now his love for baseball has transcended his playing career.

Ryan Krokos, a former pitcher who finished his senior season at YSU with a team-high 27 appearances as a starter and from the bullpen, was named a volunteer coach for the YSU baseball team after he graduated last season.

“I wanted to play baseball as long as I could, so I have kind of maxed that out,” Krokos said. “I love [baseball]. To come to the baseball field every day and call that work, while teaching the players, is a huge passion for me.”

Head coach Steve Gillispie discussed how Krokos played, and his transition to the coaching staff. 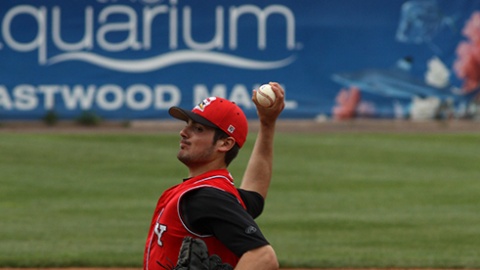 “He was very competitive as a player and was very detail oriented. He had a great aptitude for applying what was being taught or coached,” Gillispie said. “He was very disciplined and knew what it took to improve and to become a better ball player.”

Gillispie said Krokos was a coachable player that always wanted to better himself. Gillispie said that allowed him to become a good coach after playing.

“Before the start of his senior season, we, as a staff, asked Ryan [Krokos] to change the arm angle he threw at, which goes to show he wanted to do everything he could to get better and to help the team,” Gillispie said. “As a young college coach, you must take on a lot of grunt work to ultimately reach certain goals.”

Krokos talked about being so close in age and thought to the guys on the baseball team, and how that affects his coaching style.

Joe King, a junior left-handed pitcher at YSU, talked about what Krokos provides to the team.

“Although there are similarities from the players to Coach Krokos,” King said. “We have a certain respect for him as we do for all the coaches, but he gets us a little more than the rest of the coaches. Since he’s a few years older than us, he was in our shoes just last year. As a team we can relate a little more to what he is saying because he has done what we are doing before.”

Gillispie also spoke on Krokos and how having him on his coaching staff is so important.

“He’s still close enough in age and knowledge that he can remember when he was told things to do in his game and can relay to the guys in a way that isn’t so coached.

“I’m very much removed from the college-athlete scene, and Ryan [Krokos] can relate to players in a way that my coaches and I really can’t,” Gillispie said. “Since he played with some of the guys who are still here, he has a relationship that although he is just as young, he is still a coach after all, and he is an absolutely prefect addition to our staff.”