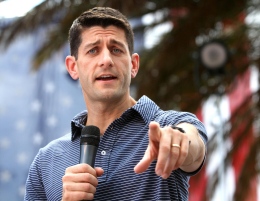 U.S. Rep. Paul Ryan, the likely Republican Party vice presidential nominee, has drawn criticism for his proposals to Medicare and Medicaid, but college students may be more concerned about his suggestions to reform federal student aid.

Changes to the Pell Grant program, which is based on need, are some of the specific reforms.

One out of every five students receives Pell Grant funding.

Ryan and Mitt Romney, the presumptive Republican Party presidential nominee, both back alterations to the federal Pell Grant program. The two conservatives are critical of the program and of the Obama administration’s decision to increase the award’s amount and yearlong availability for summer classes.

In Path to Prosperity budget proposals for fiscal years 2012 and 2013, Ryan described the program and the Obama administration’s changes as being “unsustainable.” In his words, the current program is on its way toward “creating a ‘funding cliff’ that puts the program at risk of breaking its promises to students.”

Under Ryan’s plan, students who qualify for just the minimum award amount, part-time students and those enrolled in summer classes will be unable to receive grant funding. Any Youngstown State University students falling into these three categories would lose their funding. The proposals make no mention of exceptions based on family or any other circumstances.

The Obama campaign claims this will cut scholarships for some 10 million students, including students like YSU sophomore Daniel Gleydura.

Gleydura receives the minimum amount available under the program and would lose his funds under the Ryan proposal.

“It may not seem like much, but it does help,” he said. “Books are expensive; college is expensive. Anything helps.”

Aside from the above specifics, Ryan also advocates a maximum income cap for eligible recipients. While his proposal doesn’t state where the cap would be placed, he argues that such a move would better target the program toward the needy.

Other proposals are the rollback of the 2007 eligibility expansions that broadened the grant eligibility pool and the stoppage of administrative fee payments to universities.

Ryan would also like to see a reduction in the overall award amount; the current range is from $555 to $5,500, but he’d like the range to be restored to pre-Obama administration levels of $400 to $4,310. The amounts were increased to combat the stress placed on in-need families due to the 2008 financial crisis and the rising cost of higher education.

“YSU’s administrative cost allowance for Pell Grants is about $40,000 per year, or just 0.025 percent of YSU’s total general fund budget,” he said. “So, the impact on YSU would be relatively minor. I suspect the impact on other colleges and universities would vary depending on the number of Pell recipients.”