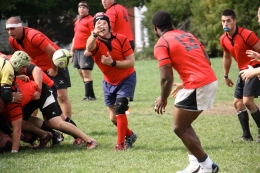 The Youngstown Steel Valley Rugby Club ended the fall season two weeks ago and will begin exhibition matches against university teams. The team is also looking to begin workouts at a new facility in Boardman. Photo by Dustin Livesay/The Jambar.

The Steel Valley team is made up of some players from what was previously known as Youngstown State University’s rugby team.

The collegiate team recently became a men’s team after most players’ college eligibility ran out.

The rugby club can now schedule games against university teams now that the season has ended. Most will be exhibition games.

“We had another game set up with a team from Canton, but it fell through,” said Brett Grabman, vice president of the rugby club.

“But now, with the fall season over, we can really play whoever we want.”

Grabman noted that the league generates the fall schedule.

“Cleveland State called us looking for the game,” said Shawn McClellan, president of the rugby club. “They have recently re-established their team, so they were looking for opponents.

Their situation is almost like a fraternity, where the members pledge and stuff to join the team.”

Grabman said he notices similarities between the Highlanders and other opponents.

“We have played them before, and we usually have an evenly played match with them,” Grabman said. “The Highlanders and the team from Canton are pretty even with us. They are pretty good matches.”

“What we used to do to teams is what teams did to us this season,” he said. “Experience will overcome individual talent during games. “

“This season went exactly like we thought it would,” McClellan said. “We knew we were going to take our licks, and we just have to learn from them. We can definitely take what we learned and use them going forward.”

Forward Matt Ruse also agreed with McClellan and Grabman, but he noticed improvement as the season progressed.

“This season was definitely a learning experience, as they both said,” Ruse said. “We just have to take what we learned and build on it. Now, with the offseason coming up, we will start to work on our condition and just get better in practice.”

McClellan said the Steel Valley team would begin working out at a gym that will be opening in Boardman. He said the team would benefit from the workouts.

“We will be working with personal trainers on our strength and conditioning,” McClellan said. “We have to get the funding together for that, but hopefully that will work out.”

Grabman added that they would resemble “Iron Man” workouts.

“It is going [to] be things like tires and stuff like that,” Grabman said. “Those kind of workouts will really help us, especially when we start back into the season.”

Additionally, Grabman said the YSU team is in the process of restarting.

“We will have some of the guys be doing volunteer work with us,” he said. “There are definitely guys who want to play, so it’s a good start.”

McClellan said getting the YSU team started depends on having enough players.

“We need 15 guys to field a team,” McClellan said. “We are going to try to have a team ready, but I just am not sure right now.”