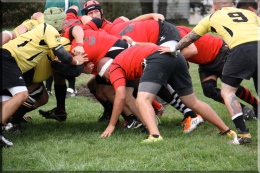 The Youngstown Steel Valley Rugby Club concluded its season after hosting and winning the “Best of the Rest” tournament. File photo by Dustin Livesay/The Jambar.

The Youngstown Steel Valley Rugby Club, formerly the Youngstown State University Rugby Club, concluded this season on a high note, hosting and winning a tournament dubbed “The Best of the Rest,” which featured teams that did not make the playoffs in their division. The club is in Division III of the Midwest Rugby Union.

The club had a much-improved regular season, too, finishing 3-3; it marked significant progress from last year’s 1-8 run.

“Our season was a lot better this year,” said Matt Ruse, who was voted in as president of the club on Nov. 10. “We had a rough start, but we showed a great improvement this year.”

The club picked up five new players this season, and Ruse said the new blood has helped the team, despite a lack of experience.

“[They] have made a good impact on the team. We’re always looking for new guys,” he said.

Ruse said that more than half of the players on the team had never played rugby before their first practice. Many of the incoming players don’t know all the rules, but Ruse and teammate Brett Grabman were happy to mentor new players and bring them up to speed.

“Basically, Youngstown has never heard of rugby,” Grabman said. “If someone comes to us and doesn’t know how to play, we teach them.”

Grabman used to be president of the club, but he now concentrates his efforts on coaching.

Youngstown Steel Valley became a men’s club in 2011. The players practice at Harrison Field, with their regular season running between March and November. Training begins in the spring.

“We hope to carry this momentum into spring and then into fall,” Ruse said.

The team’s winter meeting finished the season on a positive note, Ruse said.

“We have plans for a youth rugby clinic. We only just brought it up [at the weekend], so it’s in the works,” he said.

The team threw a fundraiser tournament for the Michael T. Hartzell Memorial Scholarship fund, raising more than $2,500. Ruse said the players have plans to repeat that fundraiser event next season and are planning other charity events.

Ruse said the social aspect of the sport was appealing.

“[The team members are] best friends after the game,” Ruse said. “There’s a brotherhood between the players. Even if you see a guy from another team, there’s a respect because you know what they go through.”

Ruse plays several different forward positions, and cited the challenge of the sport as the reason he fell in love with it.

“It’s got a reputation as a rough sport. It has the physicality of football with the endurance of soccer or lacrosse,” Ruse said.