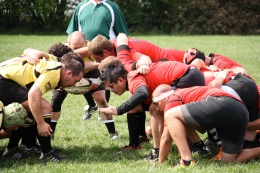 A group of Youngstown State University Police Department officers have joined the Youngstown Steel Valley Rugby Club, and the club’s vice president, Brett Grabman, is excited to see what they can bring to the team this spring.

“It is kind of a natural thing in a way, I guess. Their jobs demand them to be very physical. They may not like to run an hour on a treadmill, but they don’t mind running 20 yards on a field to tackle somebody,” Grabman said.

Last fall, the club played in its first men’s season, after playing the previous few at the collegiate level at Youngstown State University.

The transition was rough.

“When we were still playing as YSU, we had one of the biggest teams in the league when it came to our size,” Grabman said. “Now, we still have a pretty big team, but the other teams have guys the same size, but with 10 to 12 years of experience on us.”

The team finished 1-8 last fall. Club President Shawn McClelland said he likes what he sees going into the spring.

“Everyone smashed on us,” McClelland said about the fall season. “Some of [the games] were close, though. I think those close ones, we are going to be able to get this time around.”

But Grabman said he sees a natural progression that will hopefully translate into success for the team this spring season. The team’s goal is a winning season.

With 10 new players joining, the team is now working toward the spring season.

“This has been probably our most productive offseason we ever had,” Ruse said. “We have had a lot of new guys come in, and it has really been great for the team.”

Grabman said they have been much more organized with practice this season, and the new additions to the team should benefit them.

“The influx of new guys we have had has been awesome,” Grabman said. “We almost started from scratch, going over the fundamentals. Passing, tackling, scrumming, things like that.”

McClelland said the team has benefited from team workouts. Members train at the Ironman Gym in downtown Youngstown on Saturdays, along with their other practices.

“We have an involuntary workout Sunday mornings, and then a practice after that,” McClelland said. “Half of the guys are still burnt out from the workout, but still make it to practice.”

Steel Valley will open its spring season in the Highlanders tournament on March 31. But before that, Ruse said they would have an intrasquad scrimmage.

“It will be good for some of the new guys to be able to see some type of game action instead of just having a regular practice,” Ruse said.

Grabman said they are familiar with the Highlanders, as they have formed a friendly rivalry with Steel Valley.

“We support each other whenever we are playing,” Grabman said. “We will open [the tournament] against the Huntington Men’s Club from West Virginia. It won’t be a very long tournament, maybe two or three games, but it will be a good tournament for us to start in.”

The team has been getting great feedback from the Youngstown community, which Grabman said is important when recruiting new players.

“One of the news stations came out to one of our games, and that got us a lot of really good feedback,” he said.

Though they are now a men’s club, the team still has a deep connection to YSU. Twenty-one guys make up the team, and all have either graduated from or still attend YSU.

“There are some guys who weren’t students when they joined, and now they are students,” McClelland said. “It’s going back and forth. Some guys are graduating, and some guys are just getting there.”

The team is also working on a few charity games to play in.

Grabman said they are working toward a game that would benefit the Michael T. Hartzell Memorial Scholarship fund. McClelland also mentioned a few others they hope to secure.

“We are trying to set up a charity game with the Westmoreland Highlanders and us for the Youngstown Boys and Girls Club,” McClelland said. “There is a tournament we are going to try to go to on May 5 at Fairmont University, and that is to benefit a state trooper that was shot and killed.”

As the season nears its starting point, Grabman said the team is always looking for new members.

“Anyone can join,” Grabman said. “Everyone plays, and it is a lot of fun to be a part of.”