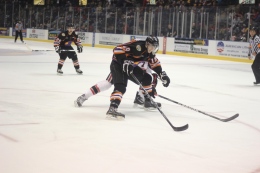 Middle school students from Poland, Boardman, Brookfield and more didn’t go to school on Wednesday. Instead, they made a trip downtown to the Covelli Centre to watch the Youngstown Phantoms in action against the Chicago Steel.

“It was a fun game to play and definitely the loudest I ever remember being on the bench,” said Phantoms head coach Anthony Noreen. “I had to scream to get messages across to them.”

“For the noise meter, you couldn’t even hear a whistle or hear yourself think,” Cangelosi said.

The crowd screamed for the Phantoms (21-13-3) throughout, but couldn’t help the Phantoms win as they lost their 13th game of the season, 3-1.

Cangelosi scored with 1:12 remaining in the first period. Forward Sam Anas picked up the assist.

Forward Mike Ambrosia crossed the puck out of the wall to Anas, who hit Cangelosi on the run. Cangelosi beat the defense, put on the brakes and slid and scored in the back end of the net.

The goal was Cangelosi’s 17th of the season. He is tied with J.T. Stenglein for the team lead.

After heading into the locker room with the lead, the Steel (13-23-1) stole the momentum within the first 23 seconds of the second period. Forward Ali Thomas scored his fifth goal of the season.

“One of the first things we talk about [in] hockey is how important a goal is in the first and last minute of every period,” Noreen said. “Today, we just didn’t take care of those.”

The Steel came out firing again within the first 29 seconds of the third period as Ryan Trenz picked up his first goal of the season, giving the Steel a 2-1 lead.

Laterin the third period, forward Alex Roos scored his second goal of the year with 15:25 remaining. The Steel led, 3-1, and kept the lead throughout.

“I thought we kept coming even though we were down 3-1, battled and never gave up,” Noreen said. “We just weren’t our normal selves today.”

Steel goalkeeper Alex Sakellaropoulos picked up 31 saves and kept the Phantoms from scoring after the first period.

“On the other end, I think their goalie played great,” Noreen said. “He made some huge saves, some game-changers.”

The Phantoms normally play at night and had to adjust to the 10 a.m. start. Typically, their skate-around is at 10 a.m. They then go home for a nap and return for their pregame meal four hours prior to the start of the game.

On Wednesday, the Phantoms arrived at the Covelli Centre two hours before the puck dropped. Noreen said playing early is no excuse.

“No matter when you play, you’ve got to be ready to go,” Noreen said.

Noreen added that the Phantoms’ offense skated too quickly.

“One of the things we talk about is the transition from defense to offense,” he said. “I think our guys tried to carry our transition offense a little too quick, and that’s going to happen in our quick style of play.”

Cangelosi said a few players might have been still sleeping.

“We got to bring it,” he said. “We’ve got to pick each other up on the bench.