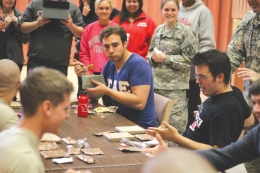 John Guy (center) and Patrick Bascom (bottom right), both brothers of the Sigma Alpha Epsilon fraternity, compete against ROTC members in an eating contest. The event and five other competitions were part of a fundraiser for the Children’s Miracle Network. Photo by Dustin Livesay/The Jambar.

On Thursday, Sigma Alpha Epsilon combined forces with the ROTC at Youngstown State University to raise money for the Children’s Miracle Network.

ROTC has been active in YSU events like Welcome Week, but has never paired up with another group for an official event on campus.

Thomas Ericksen, a senior military science instructor and three-year ROTC faculty member, said he was excited about the collaboration.

“We turned a competition into something that’s fun for our students and SAE’s fraternity members, but at the same time, it helps benefit the community,” Ericksen said.

The SAE brothers put up a good fight, but members of the ROTC swept all six events. In the process, $426.16 was raised for charity.

Patrick Bascom, an SAE brother, said he came up with the idea for the event.

“It’s a unique way to show that fraternities are not all about how they are portrayed on TV, and ROTC knows how to have fun,” Bascom said.

Bascom approached 2nd Lt. Scott Smith, a YSU graduate, about the idea, and six weeks later, the event was in place.

“It’s good to bring the fraternities and the ROTC together in order to support the cause,” Smith said. “Hopefully, this is the beginning, and next year it grows bigger and bigger. Who knows, maybe one day [we] will be collecting as much money as the Zetas for charity.”

SAE, Rookery Radio and ROTC will team up again for a concert on Nov. 14. All proceeds will go toward the Children’s Miracle Network.