Sophomore Rosie Bresson, a musical theatre major at Youngstown State University from Canfield, auditioned and was accepted into The Open Jar Institute Summer College Intensive in January of 2018.

The program selects 120 students across the United States to spend a week in New York City. These students spend time training with Broadway professionals, seeing Broadway shows and making important connections in the industry.

Bresson said ever since she was young, she had a strong love for singing and music. She said her parents had her enrolled in dance classes as well and she also had theatre experience at a young age.

“When I was in elementary school I tried out on a whim for this little church play thing, and just from then on I fell in love with being on stage,” Bresson said. “It just grew from there over the years into what I knew I wanted to do.”

Bresson said when she was a junior, Canfield High School did a production of the musical “Ragtime” in partnership with Chaney High School. She said she played one of the lead roles in a musical called “Mother.”

“That was a life changing experience for me because it was such an in-depth show and in-depth role,” Bresson said. “It … made me realize that this was exactly what I wanted to do for sure.”

Bresson said she always wanted to be like Julie Andrews and her dream is to play every role Andrews has ever done. She said she grew up watching “The Sound of Music” on VHS, and watching the way Andrews invested herself into that movie and hearing Andrews sing made Bresson want to emulate the presence and energy she has. She also played Mary Poppins during her senior year in high school.

Bresson said in the past year she has had the opportunity to fill many roles in plays. She said she was in last spring’s production of “No More Peace” at YSU and the musical “Spring Awakening” this past fall. 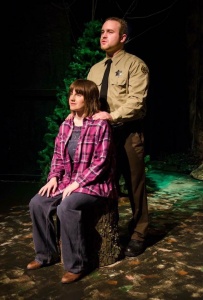 “Last summer, I made my professional debut in Mercury Theatre Company’s ‘La Cage Aux Folles,’” Bresson said. “Right now, I just got cast in a production of ‘The Last Five Years’ with Millenial Theatre Company.”

Bresson said she’s been very fortunate both at YSU and outside of the university to work with a wide range of different directors and actors. She said she thinks she can learn something from every person she works with.

“I love getting to interact with so many different people,” Bresson said.

Bresson said she tries to be open regarding her future because of the industry she is getting into. She said there are so many different things that can happen, but ideally after she graduates, she said she wants to move to a major city, whether it would be New York or Cleveland, and get her acting start.

“My goal is to be able to make my whole living off of my arts career,” Bresson said.

Bresson said in general, she and her fellow artists have faced a lot of pressures and stigmas from society that the arts are not an important field and not something people can find a job in. She said in reality she would say to someone who wants to go into this to ignore those pressures and to go for it.

“Having an arts career and degree can open up a whole lot of doors for you in ways you wouldn’t really imagine,” Bresson said. “If you really love it, you should pursue it and not let anyone’s opinions distract you.”

Chris Hill, assistant professor in theater and dance at YSU, has had Bresson in a number of courses from acting classes to theatre history and script analysis courses. He said he is a big fan of Bresson, and feels strongly she has and is developing the skills it will take to succeed in the acting industry.

“She’s unique in her look and in her skillset,” Hill said. “She has a great voice and is a strong dancer – but more than that, she has the work ethic that success demands.”

Hill said Bresson is curious and intelligent, but she’s also deeply empathetic and generous with those around her. He said this is the reason she is getting cast in shows at YSU and beyond.

Hill said to make it in the acting industry people have to be the hardest worker in the room and be the type of worker others want to work with again and again. He said they also need to have a great attitude, especially when things get hard, and they have to be pleasant to work with.

“If you wish to pursue acting as a career you need to be prepared to always be taking classes and growing your skills,” Hill said.