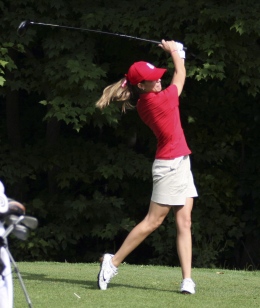 Since senior Katie Rogner joined the Youngstown State University women’s golf team in 2007, she has competed in every tournament and round.

“It went by so fast,” Rogner said. “I feel it went pretty well. I feel like I’ve got everything in Youngstown. There’s not a thing I would change.”

Rogner added that making new friends was one of the best experiences.

“It was a lot more than just classes,” Rogner said. “It was about making friendships and enjoying what you do.”

“She did well with them,” Schwartz said. “She was a team leader, but she had friends that were on other teams as well. She enjoys people. That’s the type of person she is.”

Rogner will graduate with an engineering degree, but she will try to further her career in golf first. If that doesn’t pan out, she will attempt to work for General Electric, where she recently interned.

“I’m in the process of making that decision,” Rogner said. “I’m searching right now and networking for jobs. Without my parents, there would be no engineering.”

As a freshman, Rogner was named team MVP and Horizon League Newcomer of the Year. She also took medalist honors at the Loyola Caputo Invitational and the Horizon League Championships.

As a sophomore, Rogner took medalist honors at the YSU Invitational, where she shot a 73. She finished fifth at the Horizon League Championships and was a member of the all-tournament team.

Schwartz coached Rogner throughout her four-year career, and Rogner said Schwartz helped her evolve into the golfer she is today.

“If it wasn’t for Coach Schwartz, I wouldn’t golf,” Rogner said.

Schwartz said Rogner is one of the best golfers she’s ever coached.

“She was probably in the top three,” Schwartz said. “It was a pleasure because she was fun and a hard worker.”

Schwartz said Rogner has an “inner excitement about golf.”

“Even if there was bad weather, she’d go out and play on her own and had the ambition to get better,” Schwartz said.

As a junior, Rogner was named The Vindicator’s YSU Female Athlete of the Year and finished fourth at the Horizon League Championships. She was also named first-team all-Horizon League and an all-tournament team selection.

In her senior season, Rogner was a first-team all-Horizon League pick and finished 16th in the championship tournament. She earned medalist honors twice.