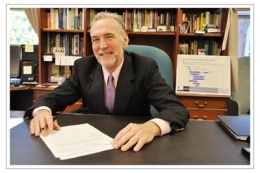 “They were demonstrating the end of war and to have peace, you know,” Williams said. “These were the ‘60s. We had lots of fun that way.”

The 66-year-old graduated from YSU in 1969 and is the provost at Slippery Rock University. He reflected on Youngstown for the first time in a while.

“It was interesting, and at the time I didn’t think that a bunch of young people carrying on in the middle of Ohio could make any difference,” Williams said. “But nationally, eventually it did make a difference to have those movements.”

Williams became a member of the SRU faculty in 1981 after teaching in West Virginia.

A short while later, Williams was promoted to chairman of the English department at SRU and became president of the local faculty union.

“I like the job a lot. It’s kind of an ideal job,” Williams said. “I get to oversee all the academic programs. The deans report to me. I get to allocate resources and see what kind of programs are appropriate for the institution and kind of create the academic image of the institution.”

Williams said he is not sure YSU prepared him for his job as provost, but he does feel the university did a great job providing him with a solid education in English.

“[YSU] really did give me good intellectual background, which is important for getting a job like this,” Williams said. “I have great respect for the education I got from Youngstown.”

In his time at YSU, Williams was also a member of Delta Sigma Phi.

“I was mostly interested in the academic part,” he said.

“Originally, [Williams] seemed to be aloof, but after a while, we all found out he was just quiet,” Konnen said. “He always had a 4.0 and helped us when we would rather party than study.”

Konnen, 68, served as the director of budget and fiscal programming at SRU for 30 years until he retired in 2005. He said others also noticed Williams’ leadership.

“We had a few provost failure issues, but it was the best decision when Williams was given the job,” he said.

Cynthia Dillon, assistant to the provost, has worked with Williams for several years. She said she appreciates how efficiently he communicates with faculty and administration.

Dillon added that Williams understands faculty issues and the needs of the institutions.

“[Williams] has an extensive background as an educator and as president of the faculty union,” Dillon said. “He is a real advocate for academic programs, which makes him a great provost.”