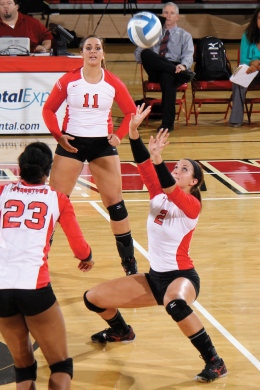 Since its season began on Aug. 24, the Youngstown State University volleyball team has been forced to cope with long bus rides, hotel rooms and unfamiliar gymnasiums.

Over the past five weekends, the Penguins have played 15 of their first 16 matches on the road.

So when YSU, 10-6, hosts the University of Illinois at Chicago on Friday and Loyola University Chicago on Saturday at Beeghly Center, the team will enjoy a little home cooking.

“Oh my gosh, we’re so happy,” sophomore middle blocker Shannon Watson said. “Just being on the road for so long and all the long road trips, it’s awesome to come back.”

“Five weekends on the road is very tough on the student-athletes physically, mentally and with classes,” Hardaway said. “It’ll be good to get back to a home crowd.”

While the weekend matches against the Flames (8-8) and the Ramblers (9-6) will open home Horizon League play for the Penguins, they began their road HL schedule this past weekend.

“We struggled with Milwaukee, but against Green Bay we definitely played with them,” said Alexis Egler, a sophomore outside hitter. “We just had a hard time pushing through at the end.”

Though the Penguins don’t want to disregard their 10-4 non-conference record, Hardaway said conference play is a new beginning.

“Once you start conference play, the records reset,” he said. “You can throw all the stats out the window, because this is really the part of the season that we work for.”

Hardaway added that the current 0-2 conference record makes the upcoming weekend extremely important for YSU. But while their HL record is negative, Egler said the Penguins’ confidence level is not.

“We’re pretty confident,” she said. “We just know we have to work hard again and just keep pushing through. We know we have the talent this year.”

Another difference from last season for YSU is the amount of success the team has already had. With 10 victories, the Penguins surpassed the win total of the past two seasons combined.

“I think he changed the overall attitude in the gym and the energy,” Watson said of Hardaway’s influence. “He knows how to teach us, compared to last year.”

Still, the Penguins are not content with the improved record.

“It’s just about continuing doing what we’ve been doing and staying with the game plan,” Hardaway said. “The team’s done a good job of buying in long term, and I think we gotta keep pushing that because we know that will be successful.”

Friday’s match begins at 7 p.m., while Saturday’s match will start at 4 p.m. “We’re going against teams that we know that we can beat,” Watson said.

“These are games that we know we need to win to get into the [Horizon League] tournament. I think we’re going to be fueling off the past two losses from last week.”