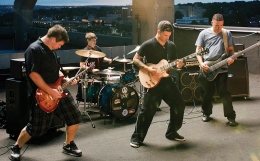 There’s a barn in North Jackson that sits behind a small ranch-style house in a field. Its exterior blends into the pastoral landscape, but within the barn are the tools of musicians rather than farmers.

Three days a week, Phoenix Rising, a local rock band is there practicing for a show or just hanging out.

The band’s members call it “the shack.”

“This is where it all goes down,” said Armand DePaul, lead singer for the band.

On Nov. 14, the band members were in the shack, putting together a set list for their showcase Friday at Sammy’s Great American Bar in Youngstown.

“I’m a bit older than these guys, so my influences are mostly classic rock,” said Billy Wright, the band’s 40-year-old bass player. DePaul said the multigenerational mix gives the band a unique style.

“Everyone associates with familiarity, but at the end of the day, we have our own sound,” he said. “Put our record in, and it’s us.” Wright was introduced to the band through drummer Heather Jurina.

“Billy and I actually used to play in a metal band together, so when it came down to the wire and we needed a bass player, he was the first guy I thought of,” Jurina said. “He’s the best ass-saver out there.”

DePaul and guitar player Kevin Merrell met through a mutual friend in 2008 and decided to start the band together.

Merrell said music has been a constant in their lives.

“Some kids go on vacation, and we all played music,” Merrell said while strumming his Gibson Les Paul guitar in the shack.

For some members, their musical influences began before birth.

Phoenix Rising recently filmed a music video for their song “Let Go,” part of which was filmed on the rooftop of Stambaugh Stadium at Youngstown State University.

DePaul, a senior finance major at YSU, said this was the first professional-level video filmed for the band.

The band released a teaser of the music video in October and is anticipating the video release, which is coming out in conjunction with their new album. They are aiming for a spring release.

Jurina said filming the music video is a memory none of them will forget.

DePaul said all four members relate to the video.

“It really speaks on behalf of all four of us, because you have to let go to grow,” DePaul said.