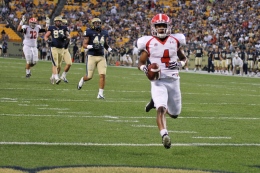 Andre Stubbs (4) scores a touchdown during the first quarter against the University of Pittsburgh. The Penguins upset the Panthers 31-17. Dustin Livesay/The Jambar

In the aftermath of Youngstown State University’s victory against the University of Pittsburgh, Aronde Stanton said what everyone who witnessed the upset was likely thinking: “Our team is ridiculously good.”

While the jury is still out on the 2012 Penguins, a dominating 31-17 victory against the Pitt Panthers at Heinz Field on Saturday night certainly supports Stanton’s statement.

“We believed in our locker room that we could beat this Pitt team,” said quarterback Kurt Hess. “Give lot of credit to them because they played tough tonight, but our locker room really believed we could do it.”

With the win, YSU captured its first victory against a Football Bowl Subdivision school since defeating Kent State University in 2000. It’s also the Penguins’ first win in a “money game” since 2005.

But head football coach Eric Wolford said his team was just following one of its “fundamentals for success.”

“We have 16 of them, and one of them is, ‘Expect to win,’” Wolford said. “[This win] is a compliment to our coaching staff and our players.”

The Penguins didn’t waste any time getting on the scoreboard. Following a recovered Pitt fumble by Jeremy Edwards, the YSU offense marched 79 yards, capping the opening drive with a 27-yard touchdown catch by Andre Stubbs.

Pitt answered immediately when Isaac Bennett found the end zone from 4 yards out.

However, the Penguins regained the lead in the second quarter. On a drive where YSU converted four third downs over 92 yards, Hess connected with tight end Will Shaw for a 14-yard touchdown.

Although Pitt added a field goal, YSU took a 14-10 lead into halftime.

Storming out of the gates into the second half, the Penguins marched right down the field once again, showing off their creativity in the process.

On fourth and 1 at the Pitt 23, Hess tossed to halfback Jamaine Cook who, instead of running for the first down, dropped back and threw to a wide-open Shaw for a 21-10 lead.

The Panthers, meanwhile, didn’t fare as well on their own fourth and 1. Late in the third quarter with the ball at the YSU 19, the Penguins stuffed a Panthers run, drawing boos from a Pitt crowd of 40,387.

“We did that fourth-down stop with sophomores,” Stanton said, explaining how the newfound depth paid off. “It’s a good thing.”

The boos continued into the fourth quarter when the 5-foot-6-inch Stubbs extended the YSU lead to 28-10 with a 13-yard touchdown run.

“He’s one of the fastest guys I’ve ever seen,” Hess said of Stubbs, who finished with 71 rushing yards, 61 passing yards and two touchdowns. “Sometimes it’s a little hard to see him, but he’s so fast he gets open.”

The Panthers didn’t go away, though. Pitt quarterback Tino Sunseri connected with Joshua Brinson for a 35-yard touchdown to cut the lead to 28-17 with 9 minutes and 17 seconds remaining.

But, on this night, the YSU offense was simply too good. The Penguins closed out the upset victory with a David Brown 25-yard field goal.

While the Heinz Field stands were covered mostly in blue and gold, there was also quite a bit of YSU red.

“Our community stuck by us,” Wolford said. “This win was for [Youngstown].”

Although Stubbs said the team will make sure to stay humble, no doubt this is a win the Penguins will remember forever.

“It really hasn’t set in yet, but I think it will sometime soon,” Hess said.