Touring musician and songwriter Gaelynn Lea performed at the variety show held by Golden String Radio at the Morley Theater on Tuesday.

Lea won NPR Music’s Tiny Desk Contest in 2016, when her original song “Someday We’ll Linger in the Sun” was chosen over 6,000 musicians’ submissions. Lea is trained in violin, which she said has been her instrument of choice since she was 10 years old. 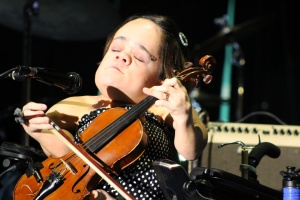 Golden String Radio, a radio station run by adults with disabilities, organized the event with Purple Cat Productions. Lea, an activist and public speaker for disability rights, said she was pleased to perform at the variety show.

“Performing by itself is just about connecting with the audience and helping to create something that they can relate to and that they enjoy,” Lea said. “When I get to do things like speaking and disability rights, that’s sort of a separate thing for me where I can help hopefully promote rights for people with disabilities.”

Purple Cat is a day-time habilitation program for adults with disabilities. Jim Sutman, DJ at Golden String Radio, said the program offers disabled adults jobs in various disciplines, such as cooking, farming and the arts.

Adults involved at Purple Cat are paid at least minimum wage, varying from all ranges of hours depending on the disability case.

The Purple Cat Music Class performed in the variety show as well, where the group played instruments and vocals to original music.

Amy Rigby, the events coordinator and supervisor of Purple Cat Productions, said the performance was the smoothest that they have ever put on, regardless of it being short notice.

“I really quickly thought of everything I do for a play or production and mushed it into one month,” Rigby said. “I couldn’t have asked for anything better.”

This was the fourth public performance for Purple Cat Productions. Sutman said they perform once per year, typically the performances being plays.

“We do anything that the Youngstown Playhouse would do at a slower pace,” Sutman said.

Previous performances have been play productions, including Alice in Wonderland and Charlie and the Chocolate Factory. Rigby said she started Purple Cat Productions in 2013.

“I started small just to see what we could do and because they were so talented and they could do everything that I threw at them … I was like, ‘Oh my gosh, can we get the Playhouse?’ and we did,” Rigby said.

Purple Cat Productions had a full house when they performed at the Playhouse. Rigby said she is proud of how far the performers have come and challenges them to excel even further.

Sutman said the performances are a great way for people in Purple Cat to express themselves.

“Somebody with a disability may not be able to tell you their philosophy, so you really find out a lot about what they’re doing through their art,” Sutman said.