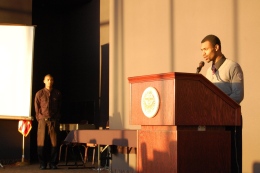 Dewayne Cross sang “Lift Every Voice and Sing,” which is regarded as the African-American national anthem, to begin the Malcolm X diversity dinner on Saturday. The YSU Black Student Union sponsored the event. Photo by Chelsea Telega/The Jambar.

Deandre Radcliffe, president of the Black Student Union at Youngstown State University, is using the accomplishments of local black high school students and the lessons of a late activist to educate the community.

As part of the experience, university leaders and students gathered to pay tribute to Malcolm X, a historical leader who dealt with African-American equality, community empowerment and social development.

Radcliffe said he wanted to remind the current generation of Malcolm X’s efforts to advance racial equality in America.

“When people forget their past, it tends to repeat, so we want to keep that recognition going,” Radcliffe said.

William Blake, director of student diversity programs, said that many people in Youngstown can relate to Malcolm X’s grassroots approach to organizing.

The Black Student Union, the Student Diversity Council and the YSU Office of Student Diversity hosted the dinner on Friday in the DeBartolo Stadium Club in Stambaugh Stadium to commemorate the activist’s achievements.

Blake said it is important for community members to empower themselves and be a part of an economic and social movement.

As a prisoner and activist, Malcolm X knew how to deal with problems in a progressive way, Blake said.

Blake said his mission is to ensure that young people react similarly when faced with adversity. He said he wants students to learn from history in order to reach a future of peace and tranquility.

“Right now, we fight each other about everything. Everything is so important, even to the point where we kill each other. In this community, we really have to stop that because violence has truly gotten out of hand,” Blake said in response to a visit from the mother of a YSU student who was killed in an off-campus shooting last year.

Malcolm X led young people in his movements to boycott and protest in order to be a more dynamic part of their community.

Leonard Martin, a former YSU student who attended the diversity dinner, said it is imperative to recognize younger students for their accomplishments because the positive feedback encourages them.

Martin said everyone needs to hear a good word, and the younger the recipients are, the better.

“If they’re a passionate writer, recognize that so it’s going to make them a better writer. You never know, they could be one of the best-selling authors out there,” Martin said.

Melvin Lomax, who will attend YSU in the fall, went to the dinner to support Radcliffe and the cause.

Lomax said it’s a great feeling to know that someone Radcliffe’s age, 21, is concerned with past events and making an impact on the future.

“Having this dinner just shows respect and appreciation for things that have happened in the past,” Lomax said. “There’s substance here, and that’s what it’s all about.”

The presentation highlighted the importance of voter registration for the prospective voters in attendance.

“The youth is the future; that’s the bottom line. Our older parents and grandparents are not going to be here for that long,” Martin said. “So it’s up to us as young adults, young children, coming up to start getting the world to where we want it to be at.”

Radcliffe and Blake both said they hope to make the diversity dinner an annual event to keep reminding students to be active in the community — like the late Malcolm X.

This story has been amended. It originally stated that YSU’s Diversity Council was a host of the Malcolm X diversity dinner. However, it was actually the Student Diversity Group. We regret the error.