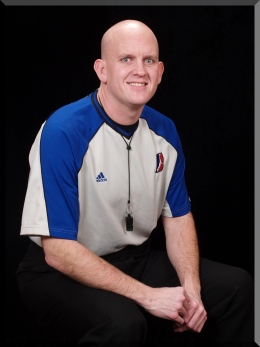 Youngstown State University alumnus Ryan O’Lear has the answer for students that want to earn income and stay active during the school year.

O’Lear is conducting a class for individuals who are interested in becoming basketball officials.

“I wanted to give students at my alma mater a chance to sign up for my class,” he said.

O’Lear has been licensed by the Ohio High School Athletic Association since 1998 and by the NCAA since 2004.

Along with refereeing in multiple college conferences and various high school games, O’Lear has also officiated for the NBA Development League tryouts, a Cleveland am-pro summer league, and a premier basketball league.

O’Lear said the biggest game he ever officiated was when No. 1-ranked Oak Hill Academy of Virginia took on No. 7-ranked Mater Dei High School of California in a cross-country battle. The high school game was televised on ESPN and more than 17,000 people were in attendance.

O’Lear said although that was a significant game, he treats all games equally. “Every single game is huge because you never know when a kid is going to have a huge game,” he said.

“As officials, we have to have an open mind and treat all games the same,” O’Lear said.

O’Lear said the best part of being an official is staying connected to the game and working with great people, while the worst part is missing a call.

“When you make an incorrect call, you have not only let yourself down, but you have also impacted the game incorrectly,” he said.

O’Lear said he encourages those interested to take his class and sign up to be an official, as there is a need for more referees. He also hopes that with all of his experience, he can be a better educator.

“I’ve been to over 85 referee camps and spent an excess of $20,000 on basketball education,” he said. “A $110 payment to OHSAA gets the student about 30 hours teaching and includes the two required tests.”

Passing the certification enables students to become officials for this season and qualifies them to referee from grade six through the junior varsity level. To register for the course, students need to register with the OHSAA at http://www.officials.myohsaa.org.

The class will be held at Newton Falls High School and is scheduled to start on Monday. Those interested can contact O’Lear either by calling 330-931-7059 or by email at drtrumpet44444@gmail.com.