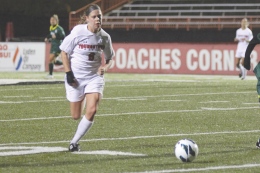 Although the Youngstown State University soccer team was down after Tuesday’s loss against Wright State University in the first round of the Horizon League playoffs, head soccer coach Will Lemke said he couldn’t overlook the positives.

“We took a giant step forward [this season] to get in [the tournament] and host a game and be the fourth seed,” he said.

The Penguins made the Horizon League tournament for the first time since 2008 by defeating Wright State in the last regular season game. However, the Raiders got the last laugh by earning a 1-0 overtime victory over YSU in the opening round of the league’s tournament.

Lemke said it was a tough way to lose, but added that he knows it was a big learning experience for his young team.

One of those young players is sophomore Jade Flory.

“It was really hard to adjust,” Flory said. “We went from having the overtime win to get into conference tournament and host, and they turned around on us and got the overtimewin on us.”

The team won’t be taking much downtime and looks to get back to work very soon.

“We’ll give them a week off, and then we’re right back at it,” Lemke said.

The players are hungry and ready to get back as well.

“We want to be the best now,” Flory said. “We want to win conference.”

Anticipation for next season is at a tremendous high.

While a first-round exit wasn’t exactly what the Penguins were looking for, they did post the most wins in school history in 2012, finishing with an overall record of 8-9.

YSU was also 3-4 in the league, with regular season wins coming against the University of Wisconsin-Milwaukee, Valparaiso University and Wright State.

Previously, the Penguins had never recorded more than one victory in the league and never hosted a Horizon League tournament game.

“I’m really thankful for them to be picking me to be First-Team,” Flory said.

Flory — like her teammates — said she always strives for more success. “I would’ve liked to have a better year,” she said.