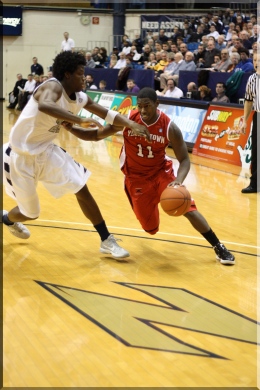 DJ Cole drives to the basket during last season’s loss to the University of Akron Zips. YSU opens its 2012-2013 season at 4 p.m. Saturday at George Washington University. Photo by Dustin Livesay/The Jambar.

Matched up with the University of Detroit Mercy in the second round of the Horizon League conference tournament, the Penguins were defeated handily, 93-76.

“I can’t speak for everybody else, but it plays in my mind constantly,” Perry said.

In that loss to the eventual HL champions, YSU committed 15 turnovers that resulted in 24 points for the Titans. Detroit also outscored the Penguins, 50-34, in a first half where YSU was sluggish from the tipoff.

“That just fuels the fire to get back out here and get ready to play,” Perry said.

Trying to fix those mistakes that plagued the Penguins in their season finale, the team has adopted a new motto: “EP.”

Created by men’s basketball athletic trainer Todd Burkey, EP stands for “every play and every possession.”

“We never know which possession or which play will get us over the top, so we have to treat every one with importance,” said senior guard Blake Allen. “Basically, every possession, play, rep in the weight room and sprint, we have to do 110 percent if we want the results to be favorable to us.”

In 2011-2012, the results for YSU were favorable more often than not. With a 16-15 record, the Penguins experienced their first winning season since joining the HL in 2001.

Still, the Penguins have bigger aspirations and look to build off last season’s success.

“We’ll be able to draw from our experiences,” Allen said. “Hopefully, we can change the results of some of those games that [kind of] went the other way.”

If so, YSU may be able to contend for the conference championship. Senior center Damian Eargle said he believes the Penguins are ready to take that next step.

“We have the squad to do that,” Eargle said.

Their opportunity to contend for the HL title is boosted by the absence of perennial powerhouse Butler University. This past offseason, the Bulldogs — a top-three finisher in the HL for the past six years — joined the Atlantic 10 Conference.

“I look at it as a great opportunity,” said head men’s basketball coach Jerry Slocum. “It gives everybody an opportunity to be the next Butler.”

Reaping the benefits of Butler’s absence is Valparaiso University, ranked first in the preseason conference. Meanwhile, the Penguins received their highest preseason ranking ever, placing fourth out of nine teams.

And while YSU is thankful for the respect they’ve gained, as Eargle said, “Nobody remembers number four.”

“Who cares about number four?” Eargle said. “Everybody wants to be number one, and that’s what we’re trying to be.”

The Penguins’ journey begins at 4 p.m. Saturday at George Washington University. They’ll then travel to the University of Georgia on Monday for a game at 7 p.m.

As the Penguins hit the road, expect them to keep EP in mind.