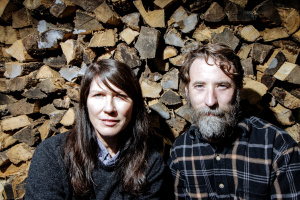 Kelley will be referred to as Kelley, after first reference: K, Mike will be: M.

Where do you guys hail from?

You guys both play in separate bands, as well as R. Ring. How did you come together to make R. Ring?

K: Well, you know, I first met Mike when I was doing a song with some mutual friends — a band called the Buffalo Killers. We were doing a song together and they said, ‘hey, we got to place that we can record this.’ So I met them at this place called Candyland Studios. It’s in Cincinnati, Ohio.

K: So, I met them at this place called Candyland Studios, in Cincy. And it’s this guy’s place. And I walked in, we played stuff, and I was like, ‘this sounds really good.’ The guy, the engineer doing it, is named Mike Montgomery. He was really nice, and he had good things to say. The way he was talking about music made sense. It was like, oh yeah; you get that language, don’t you? He had good ears, good suggestions, and it was a real easy hang. We worked on that for a little bit. Then we worked — Mike, what happened? You were working on a friend’s CD party or something?

M: Yeah, Max asked me to open for his band’s album release — but I opened solo. I said sure, not thinking about it. Then the night before — like 2 in the morning, I had finished a session — I was wrapping cables, and I was sitting to think like, well, the show’s tomorrow. I probably should have planned something, and now I’m really nervous, and Kelley happened to call at that moment, asked what I was doing. I was like: ‘Sort of freaking out. You know, I got to do this thing tomorrow, I never should have said yes.’ And she just jokingly said, ‘well, ask me next time. I could have done it with you.’ And I like, oh, well — I hadn’t thought about that.

“R. Ring.” Am I saying that correctly?

K: You know what’s funny though, when you say ‘are you saying that correctly?’ It’s funny because both Mike and I found this out through idle discussions — in a band, touring around — we both had speech therapy when we were kids for r’s. Isn’t that bizarre?

M: Either one of us will have an idea or something or a complete song. And then we’ll either say to the other one, ‘hey, here’s what I’m thinking,’ and then they kind of add their bits and bots onto it and make it into something good. Or it’s just something that just kind of comes when we’re sitting around and down the road we’ll work on it. Or we hash it out in the studio and send the ideas back and forth on our telephones or emails. Or when we drive up to either Ohio, or she comes down to Kentucky. You know, sitting around — trying to humanize the process as much as possible.

With Ampline, it’s — it used to be the three of us would kind of not work on anything until we were together. Whatever happened spontaneously was kind of how we did it. But more lately — more recently because time —

M: Life is sort of not open. We can’t be Peter Pan forever, so I’ll usually work on stuff ahead of time, just so when we’re together in a room I can take advantage of that as best as possible.

K: For R. Ring, I love the limits that we work with. I love having parameters to stretch (?) (7:40) in. It’s Mike and I. Sometimes we’ll bring in a drummer — there might be ancillary people, I guess every once in a while. But it’s not planned. When we’re writing stuff and coming up with ideas, it’s just me and Mike.

Whenever we can make something that sounds compelling, when it’s just him and I playing, when we’re both singing, any kind of combination of guitars — my little keytar organ or any vocals — anything like that, that’s got to enough for the song. Anything else has just got to be extras.

We’re not a full band, and with The Breeders, this is a full band and every kick needs to find its home. Every cymbal hit is placed there. And so if you take away a lot of the — it’s kind of the same thing in a weird way — just less people.

What’s keeping you guys in Dayton and Dayton, and not going to New York City, LA or Nashville? Bigger cities known for music.

M: Just would make me ill to live in one of those cities. I think having to spend the money to live there.

K: Just to afford real estate in those places, you couldn’t actually do anything with music. Your job becomes your job.

M: I always thought that I was very centrally located. It’s really easy to get anywhere from here.

K: There is something about that. One of the great things, we talked about this — one of the great things about living in Dayton, or a place like Ohio, is actually leaving Ohio too. So it’s really great, because you go around, things are complicated, people are bustling and hustling or whatever. Then you come back to Dayton, and the pace of life is slower, and it’s nice. My mom and dad are down the street. There’s really nice downtime. And then you’re like, ‘when can I leave again, man? I’m really bored, man.’ And you end up leaving again, and then you’re like, ‘ah, I’m back home.’ It’s a really nice way to decompress in between. Then while you’re decompressing, you’re not having to work three jobs to afford rent. It’s crazy. Or living with five people

M: Wait, I’m doing that right now. Got these damn out-of-town guests at my house.

Your Youngstown performance is at Sam Goodwill’s house/recording studio. Is that a typical venue for you guys, or are you typically playing in clubs?

M: It’s what we would like it to be a typical venue. Something where the whole point of the night is not selling alcohol would be a dream. I mean, we’re totally fine with alcohol or whatever else being there. With the bar there’s this whole order of things. There’s a door guy, there’s a sound guy, there’s a staff; there are bartenders and they’re working for tips, and if it’s a bad night you feel bad because they lost money, didn’t sell enough drinks, and it’s not really about the music.

So any time there’s an opportunity to go to a town with people’s whose lives are built around just art and music, doing stuff like that, and they open up art space or house or lodge or whatever; that’s always like a win-win. You’re not walking into an established business model.

K: I think that we are a fun band, but we’re not a party band. Sometimes when you go to clubs like that, people are there to party.

What can you tell me about the other musicians that are accompanying you on tour?

K: We’ve played with Leo before.

M: Everybody plays in their own bands, and we just kind of call our buddies. On this trip we got Nan Turner. She’s the drummer in a two-piece band called Schwervon from like Kansas City or something. Just people we’ve met over the years and thought more about can we get along with them in a car versus do they rip on their instrument. We take Kristian Svitak (professional skateboarder) with us whenever we’re able to. As always, he’s just a ray of sunshine. Cruising around with your homies.

What can folks expect from your debut, full-length album?

K: It’s funny because we actually have a song called “Heat.” We are going to bring the heat, and some stuff too.

M: You know, it’s going to be the culmination and celebration of our, at this point, almost half a decade of playing music together and just figuring out some sounds — things we like.

K: I’m going to be really interested in it too. I’m really excited to hear what our album is going to sound like. Because it wasn’t like, ‘here’s our songs, and we’re going to go in there to record them one after another.’ You know that they’re kind of playing as a playlist in your head. These are songs that, like Mike said, have been kind of rolling around. I’m really excited to see what they are. “Come my little children. Come.” You from Europe, come.

I know we discussed the inflatable penis thing, but have you guys come up with a name for the album?

Tickets for their show are available at historian.bigcortel.com.