Ryan Melquist is a solo artist and the lead singer of the band Qwister. The band formed in 2014, when Melquist decided he wanted to do larger group work. He has been playing music solo for over 20 years and is part of a duo and trio act along with the band. Melquist and his band primarily play reggae music, but they also dabble in dub, rock and pop. Melquist is always sharpening melodies, so that the songs can go any direction on any given night. The music and lyrics are catchy and upbeat. Melquist and his band put on a high-energy, powerful show that promotes positivity. The band members are Ryan Melquist on lead vocals and harmonics, Nick Campbell on drums, Nate MaHaffey on guitars, Zac Imus as DJ/aux percussion and Ryan Ecklund on bass. 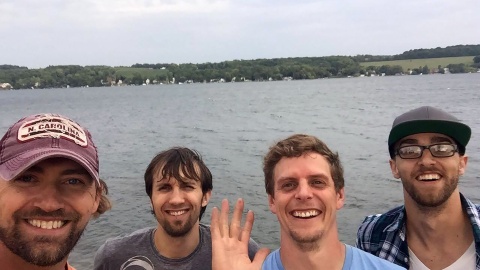 Q1: How did Qwister start?

I started in music as a solo artist touring and making music. After years of playing, I decided to create a band. We named the band Qwister after my nickname. We formed the band in Jamestown, New York; we now travel all over playing small venues.

Q2: What kind of music does the band play?

We play primarily reggae music, but we branch off into dub, rock and pop. We like to promote positivity throughout our songs. As a band, we write all of our songs, which gives each song a larger meaning to us. I feel that if you write a song it allows you to feel connected to your music since its right from the heart. It also allows people listening to get a sense of our lives. All of the songs are about our life experiences that have taken place or are happening now. Some of our songs are “Now and Then,” which has a reggae feel and “Breadwinner,” which has a rock feel to it. We enjoy playing a variety of songs.

Q3: How did you find Youngstown and decide to do a show at Suzie’s Dogs and Drafts?

We played at the Rust Belt Brewing Company a couple of years ago, and after our set, I went across the street and saw Suzie’s Dogs and Drafts. I really liked the atmosphere and stage, and I wanted to get in touch with them to book a show. They have a smaller venue, which allows us to be closer to the fans when we are playing. We booked our fist show at Suzie’s this past year, and we loved it. The location is great, and I really like growing a Youngstown following for our music. We have a show coming up at Suzie’s Dogs and Drafts Friday, which will be our first time playing a full set at this location. The show will be free to the public. Anyone thinking about going should come. We have also already booked another show at Suzie’s for the beginning of the New Year in January.