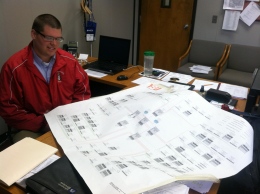 Sophomore Tim Taumoepeau is too familiar with fighting for a wireless Internet connection on campus.

“On the core of campus, I can get a pretty good connection,” Taumoepeau said. “But when I go farther out, it’s pretty hard to connect, especially in the Rec or in Beeghly Center. There’s like zero connection there.”

Thanks to a project known as the Q2 migration, students, faculty and staff will experience a better telecommunication experience at Youngstown State University.

The project will transfer campus communications, such as wireless Internet and campus telephones, to a new network called Q2.

“The old network, Legacy, was not designed to scale with the increasing size of campus,” said Jason Rakers, director of network telecommunications and security. “There was always performance problems.”

The Q2 migration will also include the implementation of IP telephony services — the integration of voice and data networks. Current campus telephones have separate data and voice networks.

And the new network will save the university money.

network,” Rakers said. “If it would have cost $100,000 to put voice and data services into a building, we effectively reduce that to approximately only 60 percent by building one network designed for both services.”

The project received funding through 2004’s information technology master plan. YSU is pursuing a $500,000 grant to use toward the Q2 migration project, sponsored by the National Science Foundation.

Rakers said the system is installed during building construction and renovation to save money and eliminate unnecessary construction.

The new network serves as a basis for upgrades for other systems on campus.

“It’s a big change for us,” Kitt said. “It’s a lot more to keep track of, but we’re seeing good things in the places we are already using it.”

Kitt said the Q2 network would affect the performance of network printing and network-based file sharing — saving a file to a YSU computer and opening it on another YSU computer.

“The system utilizes a redundant Internet connection, meaning if something goes down on the wired or wireless Internet, there is another network to back it up,” Rakers said. “We’re trying to minimize the impact of an outage. If you ever experienced it, you know how annoying it is.”

The university is working on minimizing campus Internet network outages.