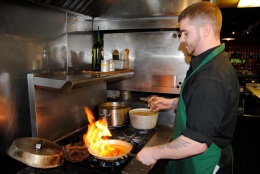 After serving in the military, Dan Warnick enrolled at Youngstown State University with the desire to find opportunity in entrepreneurship.

In an introduction to business class, Donna Walsh — a marketing instructor and program coordinator of the Monus Entrepreneurship Center — told students to not merely look for opportunity but to find a problem and fix it.

“The idea came to me because everything is rated by critics,” Warnick said. “Why is it that restaurants, hotels and gas stations all have rating systems, but nobody has developed something to rate and locate a place for people to find a public restroom?”

Though YouDoo2 is in the developmental stage, Warnick has a plan for his app.

“All of the advertising schemes, business plans and startup costs are prepared,” Warnick said. “Now all I need [is] somebody to develop my vision.”

Warnick is working with 1080 Media in Columbiana to develop the app. However, the company’s initial idea did not align with his vision for YouDoo2.

Though similar apps have been developed — such as Sit or Squat, a public restroom-finding app based in New York City and sponsored by Charmin Toilet Paper — Warnick said he doesn’t like their impracticality.

“Even though it is an app about bathrooms, I want it to be very professional,” Warnick said.

Warnick said he hopes to improve existing apps while filling a local need.

If it’s developed according to plan, YouDoo2 will serve app users in the area between Pittsburgh and Cleveland.

“This is something that has a purpose and value to people in a time of need,” Warnick said.

Another app that some YSU students find helpful is the iTourYSU, which provides a virtual campus map and tour, photographs, videos and news updates.

Although he hasn’t used iTourYSU yet, senior Charles Hunter said he could see why it would be useful.

“I still find myself looking for classrooms in buildings that are new to me after four years,” Hunter said.

The iTourYSU app is free.

“[We] will continue to use the resources at our disposal to carefully craft a very user-friendly, rich media experience that thoughtfully and accurately portrays YSU in exciting, visually appealing and interactive environments,” he said.