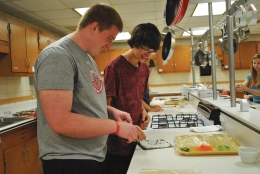 On Monday, Chelsea Welch spent a day in the life of a college student during YSU’s first Crash Day, an event organized to recruit students who are interested in attending YSU. The day’s agenda was flexible and customizable to the interests of both prospective students and their family members.

Chelsea Welch, for instance, climbed the rock wall in the Andrews Student Recreation and Wellness Center and explored the Williamson College of Business Administration.

“What I liked the most [about Crash Day] was that you got to meet new people that share your major so you are able to make more friends,” she said. “You got to meet some of your professors, which was really nice because it helped you decide if you want to take their class.”

“As a parent, you always want to make sure they are safe,” she said. “Being able to see where they are going to be helps you feel better about that.” Becky Murcko, another parent of a potential YSU student, said the event was well organized.

“This was my first official tour of YSU, and it was nice to have an in-depth tour of the campus,” she said.

Meeting another parent, Peggy Fisher, further comforted Murcko, who added that it was nice to meet others whose children are also choosing a college.

Fisher said the panel discussion with educators from YSU’s various colleges was informative.

“I was intimidated by the college process at first, but Crash Day eased my feelings. I felt more comfortable coming to campus and getting involved with the environment,” Fisher said. “It is nice to see where my kid may be walking in a year.”

Fisher and Murcko said they would be pleased if their children chose to attend YSU. Ashlee Wheatly, who plans to study psychology at YSU in the fall, said she enjoyed the chance to meet other prospective students at Crash Day.