Youngstown State University professors are no stranger to scholarly achievement. One professor in particular has displayed his academic achievements on a multitude of occasions.

Paul Sracic, professor and chair of the department of politics and international relations, was selected for his second Fulbright award to spend the next year lecturing and teaching in Japan.

“The application makes clear that they prefer candidates who have not received awards in the past. So, I was quite surprised when notified that I would be receiving a second Fulbright award,” Sracic said.

He said in order to be selected, the applicant has to be endorsed by subject level and regional peer review panels. The applicant then has to be accepted by a panel in a specific host country. 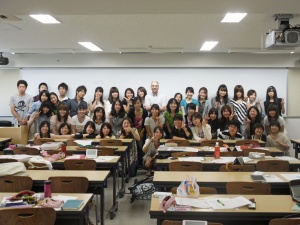 The Fulbright Program was created by U.S. Senator James William Fulbright in 1946 in order to encourage the interaction and blending of cultures.

Martin Abraham, provost and vice president of academic affairs, said, “We are thrilled that Paul Sracic was selected for a second Fulbright. Apparently, it is a rare honor for someone to be selected twice. That provides testament to the excellence of our faculty.”

Sracic was selected for his first Fulbright award during the 2009–2010 academic school year to teach in Japan at the University of Tokyo and Sophia University.

While he lectured undergraduate and graduate students, Sracic said he lived in a small apartment with his wife and two daughters located near the center of Tokyo. He traveled to his job via bullet trains and the subway system due to the lack of a car.

He said the Tokyo Fulbright alumni group is very active. They sponsor and throw events often to bring members and visiting Fulbrights together in order to get to know each other and build friendships. The alumni group consists of individuals such as government officials, CEOs and professors.

“These events allowed me to meet and learn from amazing individuals, and through the years I have been able to maintain these contacts and friendships,” Sracic said. “The Fulbright award opened many doors for me and resulted, for example, in my being selected a few years later as a Visiting Expert with the Japanese Prime Minister’s office.”

Sracic recommends any YSU professor to apply for the Fulbright award. He urges possible future applicants to look past the difficult application and requirement of outside scholarly references due to the great payout.

“It is almost a cliché to say that a Fulbright is a life-changing experience, but for me that was certainly the case,” Sracic said. “There is simply no academic experience that I have ever had comparable to my year as a Fulbright scholar.”