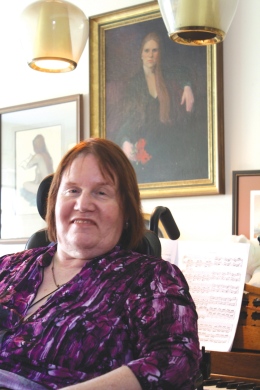 YSU professor Melissa Smith sits at her home in front of one of the many paintings her mother finished. It’s of Smith at 22 years old. Smith, who has MS, has made the trip to YSU every Tuesday and Thursday for the past 18 years. Photo by Nicole Novotny/The Jambar.

For more than a year, Melissa Smith has caught the bus on the corner of Granada and Coronado avenues. She takes the bus to Youngstown State University on Tuesdays and Thursdays around 10 a.m.

At the university, she makes her way to her office, where the YSU foreign language professor prepares for her two classes.

It’s a daily routine for most college educators, but not for Smith.

She’s made the trip for the past 18 years with multiple sclerosis, a disease that causes her immune system to attack her nervous system.

“It has been a very humanizing experience for me,” Smith said.

The Centers for Disease Control and Prevention reports that, like other autoimmune diseases, MS is three times more likely to occur in women.

According to the National Multiple Sclerosis Society, 400,000 Americans live with MS. An additional 200 are diagnosed weekly.

For many people living with MS, a numbness or tingling sensation marks the disease’s onslaught. But the symptoms and signs vary for each person.

Smith first noticed the disease in Boston in 1994, after returning from a sabbatical in Russia.

She was visiting her parents when she began seeing double.

In response, Smith went to an eye doctor in Boston, but the doctor couldn’t find the cause of her double vision.

After speaking to her cousin, Smith learned that the issue might be neurological.

She said a diagnosis, which can sometimes drag on, came rather quickly for her. She knew her parents were scared, so Smith included them in the doctor visits at Emerson Hospital in Massachusetts.

After the diagnosis, she said she recalled her father having “visions of his daughter in a wheelchair.”

But Smith said she was never scared.

The first year after her diagnosis, her friends and family told her they couldn’t believe it.

“When the doctor showed me the sheet of paper that said ‘multiple sclerosis’ on it and asked me how I felt about it, I didn’t know enough about it to feel anything,” Smith said.

To learn more, Smith said she began researching MS. She subscribed to magazines to learn more about what her life would be like.

Smith’s family has no history of MS, but it is connected to other autoimmune diseases, such as Crohn’s disease, which a few of her cousins have.

Smith said that MS is gradually debilitating and that it affects everyone differently.

She continued teaching and traveled to Russia for the next 10 years. Traveling is one of her favorite things, Smith said.

In 1999, she began using a cane and then a walker. She said the most difficult moment she faced was in 2005, when she realized she could no longer travel independently.

“I spent most of my adult life learning to be independent, and now I had to learn how to depend on people,” Smith said.

In 2006, she was fitted for a power chair in case she lost mobility.

Later that year, she fell and broke her leg. Being fitted for the power chair was a “godsend,” she said.

“[MS is the] fun disease. They don’t know what causes it, they don’t have a cure for it and they don’t know exactly what the symptoms are,” Smith said, adding that she and the disease share initials.

Smith has been certified to use hand controls in her car, but said she makes sure someone can still go with her. Getting out of the house is one of the hardest things for her to do. Smith said she tries to think of things to do, like going to the movies with her friends, so she can just get out.

While traveling, Smith fell in love with the “cafe sort of life.” She said she loves the idea of people sitting around a table, drinking wine and talking about life.

It’s a place where she can get away.

“You’re divorced from the everyday distractions. The distractions are the worst part of being at home,” Smith said.

She said she wants to learn more about her disease. She continues to read articles and attends a support group twice monthly at the Jewish Community Center on Gypsy Lane in Youngstown.

She also takes an online survey every six months that keeps track of her progress. The survey provides long-term tracking for a research group.

Being a teacher with specific needs has become difficult for her.

Smith said she understands that disability services focuses mainly on students, but finds it difficult sometimes to get help.

She takes advantage of the escort service offered on campus and is always pleased with the workers who help her.

She said she is upfront with people because she thinks it makes them more comfortable. She knows that her look affects people and wants them to know she is no different. She just can’t do everything the same way.

Smith also said she has come across many female students, faculty and employees who have graciously helped her.

Smith offers room and board to a nursing student in exchange for help around the house. She said she is pleased with the arrangement and that she is lucky that the student accepted her offer.

Smith said she plans to retire in July.

Over the years, she said she has tried to reinvent herself, as she has become accustomed to the many aspects of her disease.

“We’ll see what happens,” she said.