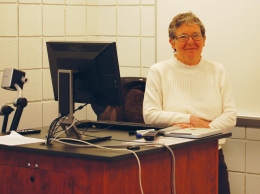 When Linda “Tess” Tessier, professor of philosophy and religious studies at Youngstown State University, could not find a suitable introductory textbook for her classes, she decided to fill the gap herself with “Living Myth,” a textbook she wrote.

“For years, I have been saying there’s just no good text. I wanted a good text for my class and similar classes taught at other colleges and universities,” Tessier said.

Tessier wanted something more than a bland textbook — she wanted a book that anyone could pick up and understand, while explaining ritual, myth and contemporary life.

Tessier came to YSU in 1988. She has taught the Myth, Symbol and Ritual class for 20 years, and has modeled her class after one of her mentors, Ronald Huntington from Chapman University in Orange County, Calif.

One of the foundations the late professor Huntington lent Tessier’s class, and one that appears prominently in her book, is the cycle mythic stories follow.

Tessier said the hero’s journey in the book represents the idea that the mythic cycle begins with creation, develops through the abundance of life and declines to death, the underworld, transformation and rebirth.

“I always tell my students … ‘This class is going to hell, but it won’t leave you there,’” she said.

Tessier’s book also explains that the underworld is a land of no return. Even if a hero is able to escape the nether regions, the person who comes up out of the darkness is not the same as the one who went down, she said.

The other inspiration for writing a contemporary book instead of a textbook was to help stamp out the idea that the study of myth has to be focused on the ancient world.

She believes that human beings crave meaning and communicate many of our truths and beliefs symbolically without even realizing we are doing it.

“There is so much focus on myth in the ancient world, as if this were something the ancient people were concerned with, and that since we have developed religion and science, it is no longer active in our lives,” Tessier said. “I think that is a huge mistake that deprives us of a whole level of meaning.”

Tessier’s own journey has taken her from managing motels in Arizona and supervising dance companies in Los Angeles to teaching in the religious studies department at YSU.

“I started at Whittier College in 1967, but I just wasn’t ready for college. I sort of just wandered off into the world,” Tessier said.

That wandering brought her back to academia when she was 30. That was when she started part-time undergraduate work at Chapman University.

Once she found her place, under the tutelage of Huntington, she graduated as Chapman’s outstanding graduate in religion in 1982.