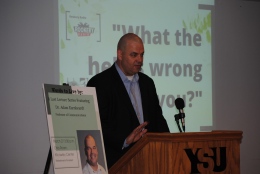 Adam Earnheardt takes audience members on a journey as he lectures in Kilcawley Center’s Ohio Room as a part of the “Last Lecture” series, which was hosted by the YSU Student Government Association on Tuesday. Photo by Jordan D. Uhl/The Jambar. Prof reflects on life, shares words of wisdom

When Adam Earnheardt first read “The Last Lecture,” written by Randy Pausch, he found himself in tears. He was at his in-laws’ house.

On Tuesday, Earnheardt, associate professor and basic course director of communication at Youngstown State University, spoke in the Ohio Room of Kilcawley Center as a part of the “Last Lecture” series, which is sponsored by the YSU Student Government Association.

The lecture series — based on Pausch’s book — invites professors to speak to a crowd as if it were the last time they would ever lecture. Earnheardt took advantage of this premise, speaking of life’s lessons and learning from mistakes.

SGA Executive Vice President Justin McIntyre said Earnheardt was chosen because of his involvement with students on campus.

“If we chose someone who could be the smartest professor on campus but have no student connection, this series wouldn’t be as successful,” McIntyre said.

Earnheardt started the lecture with a joke from “Seinfeld.”

“Do you know what people fear the most in life?” Earnheardt asked the audience.

He said the second thing people fear most in life is death.

“That means at a funeral you would rather be the one in the casket than the one delivering the sermon,” Earnheardt said.

Even though he has much experience with public speaking (and teaches it), Earnheardt admitted that he was nervous about speaking in front of students, peers and colleagues.

He reminisced about his childhood dreams. He wanted to be a race car driver, or the superhero Ultraman.

“How did I get here today?” Earnheardt asked. “I came to

Youngstown with a burning fire. … Just so eager for that chance to be in front of students, in the classroom lecturing, and the chance to change someone’s life.”

‘Just when you have your ducks in a row, you find out you have no ducks.’

Earnheardt encouraged members of the audience to close their eyes and reflect on a time when everything seemed to be changing. For him, that moment was finding out he had heart disease at the age of 34.

“I ask you to look at the changes in your life and think of how they’ve made you stronger,” Earnheardt said. “Good things can come of those changes. Don’t go into a corner and cry, don’t crawl up, don’t fold up. Use it to move forward and run forward.”

In the end, he said, the ducks don’t matter; what matters is that you took the changes and made them work for you, Earnheardt said.

‘What the hell is wrong with you?’

Again, audience members closed their eyes — but were instead asked to think about a big mistake they’ve made.

“A mistake so big you still look back every once in a while and think, ‘Oh, man. What was I thinking?’” Earnheardt said.

He then mentioned points in his life when he made major mistakes and ultimately learned from them.

From the age of 7, when he stole candy from a grocery store and learned not to steal, to the age of 21, when he was a radio DJ and didn’t think twice about what to say or what to air after a messy breakup, he remembers his mistakes and has been able to move forward in a positive direction, he said.

“It was then I learned that words are powerful and impactful,” Earnheardt added.

Next, he shared a lyric from one of his favorite musicians, Bob Marley.

‘Don’t worry about a thing.’

Earnheardt asked members of the audience one final time to close their eyes, thinking of their parents and the values they instilled.

He reflected on a day when he and his siblings awoke to realize that their father was missing.

Earnheardt’s father, who died a few years ago after a short battle with cancer, had been battling mental illness for his entire life.

“People in our neighborhood didn’t understand my father’s illness, so we were shunned from our city,” he said.

During that particular morning, his father was walking from Pittsburgh to Kentucky.

But Earnheardt’s mom said, “Don’t worry. Everything will be OK.”

That’s the message Earnheardt tried to convey: No matter what, everything will be OK in the end.

Freshman Katelyn Kridler attended Earnheardt’s lecture. She said her favorite part was the way he concluded it.

“Don’t worry about what the hell is wrong with the ducks because everything is going to be all right,” was the phrase Earnheardt fashioned from each of the three quotes to which he alluded. He added that it represents the one lesson to take away from the lecture.

As the group finished the documentary at the beginning of this year, Friedman’s condition continued to worsen. Ault said he believes the documentary is what gave Friedman hope.

“He has battled his illness to complete this project. These episodes happened after the show aired. A lot of people hang on until they get what they want,” Ault said.