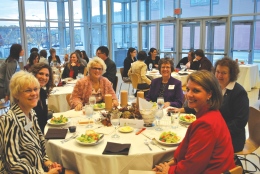 On Tuesday, the Youngstown Business and Professional Women’s Club presented Youngstown State University President Cynthia Anderson with the Woman of the Year award at Overture, located at the DeYor Performing Arts Center.

Anderson said she was taken aback when she was first informed of the award via phone.

“I’m very humbled, and this was very unexpected,” Anderson said. “It’s nice to get an award for doing what I love. It’s always been about helping students.”

“I’ve never changed my major in school and loved every position I’ve had in education,” Anderson said. The Youngstown Business and Professional Women’s Club has been around since 1920, and its mission is to advance and empower women in the workplace.

“The Woman of the Year award is given to leaders of the community who have displayed great career achievement,” said Lisa Dickson, the club’s president.

Dickson said Anderson has done a lot to help students grow and become successful at YSU.

“Anderson has given so much back to the community through mentorship, her positions on nonprofit boards and all her student programs at YSU,” Dickson said.

Anderson said she loves being YSU’s president, but her career path to president of the university was unexpected.

“In a million years, I didn’t dream I’d be the president of YSU. I’ve been very happy with all of the positions I’ve held,” Anderson said. “[I’m] very blessed to be supported by great people.”

Anderson said she hopes she can be a good role model for students.

“My advice, if I could give to any student, would be to select something that is your passion,” Anderson said. “When you wake up every morning for work, you should be doing something that you love.”

Anderson said the most satisfying part of her job is hearing stories from former students.

“I love when former students come back and talk about successes, whether it’s professional or about family,” she said. “If I can help them get wherever they are today, that’s really the most satisfying thing about a career in education.”