Youngstown State University students and faculty gathered in Cushwa Hall on Thursday to view a screening of “Traficant: The Congressman from Crimetown.” The film, directed by YSU alumnus Eric Murphy, documented the political rise and fall of Congressman Jim Traficant. 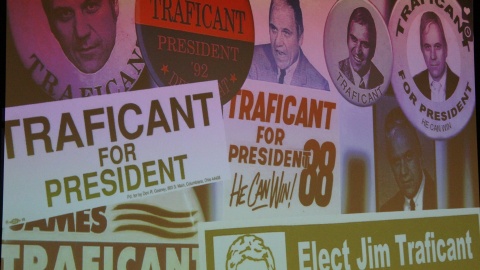 The documentary followed Traficant, who grew up in Youngstown, as he gained local fame as the Mahoning County sheriff after the collapse of the steel industry, and later, as an eccentric and uncensored member of the U.S. House of Representatives.

The film ends with Traficant’s seven-year prison sentence in 2002 for bribery and racketeering and his death in 2014.

Murphy, who received a bachelor’s degree in business administrations in 1999, began working on the film six years ago. Murphy was inspired to make the film by stories he heard of Traficant.

“He was a folk hero growing up,” Murphy said. “I worked for Tim [Ryan]. He told me a lot of the stories Jim told, and I was going [to YSU].”

Murphy said he became interested in filmmaking during this time.

“What better subject to study than a guy as complex [as Traficant]?” Murphy said.

Bill Binning, chair emeritus of the YSU department of politics and international relations, gave an introduction to the film. Binning said he developed a trusting relationship with Traficant in the ‘90s.

“I worked with Traficant on a number of issues for the local area that involved state and federal policy,” Binning said.

Binning was interviewed for the documentary, along with Congressman Tim Ryan, YSU President Jim Tressel and actor Ed O’Neill.

Recent comparisons have been made between Traficant and Republican Presidential Candidate Donald Trump. Binning said these are true in some respects.

“Like Trump, [Traficant] was a protectionist on trade, which has a long theme in the Valley,” he said. “That’s a reason Trump is faring well here.”

There are also differences between Traficant and Trump, according to Binning.

“Trump is not the reincarnation of Jim Traficant,” Binning said. “Traficant was, for here, a very strong, skillful politician, and Trump often times doesn’t show that kind of skill.”

The documentary ran for 90 minutes. Laughter resonated from the audience throughout the screening, and Murphy said it was important to capture Traficant’s colorful sense of humor.

“He gives you permission to laugh with him,” Murphy said. “Then you’re laughing at him, and he becomes this pathetic character at the end. That’s how we wanted to structure it.”

The film was recently screened at a film festival, and Murphy said it received positive responses. He said the film allows audiences who are unfamiliar with the collapsed steel industry to understand it.

“It’s a world they did not know existed,” Murphy said. “Post-industrial Midwest and mafia; that’s pretty unique to this area.”

An audience discussion opened up after the film concluded. Rachell Joy, layout design artist from the YSU Office of Marketing Communications, thanked Murphy for presenting the project.

“I believe the film is very thorough in covering [Traficant’s] career and personality,” Joy said.

Murphy said he plans to make more films based on local stories in the future.

“This was a passion project I had to get out from under my skin,” Murphy said. “The next project I do, I will be a lot more aware of the business end of what kind of audience is on the other side.”