Pi Sigma Alpha — the national honors society for political science — welcomed more than 125 students, faculty and guests to the conference, which featured 67 presentations representing 40 Pi Sigma Alpha chapters. YSU’s chapter was reinstated in the fall and is comprised 23 students.

Smith is president and Frost is vice president of the YSU chapter. They were excited to present their research and have a platform from which to discuss their work. 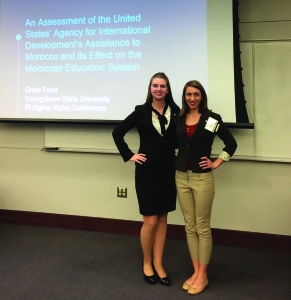 “As an undergraduate, we do not get a lot of opportunities to go to a conference, much less present our work,” Smith said. “So this was a great movement forward in terms of the academic process of political undergraduate research.”

Smith said between 60 and 80 people attended each of their sessions. Her research drew from an internship she did with the U.S. Economic Development Administration in the summer of 2014.

“I conducted substantial research on federal grant distribution mechanisms,” Smith said. “I was looking at different forms of manufacturing communities that had lost significant investment due to other countries outcompeting our region in terms of manufacturing.”

Frost presented her capstone, which assessed the impact of U.S. assistance to Morocco on the Moroccan education system. She became interested in the country while studying abroad there.

“I look into a history of Morocco’s education reforms, analyze current education problems the country is facing and compare Morocco to other similar countries,” Frost said. “Then I made policy recommendations in areas where I felt, based on my research, the strategy could be stronger.”

Smith said Georgetown political science candidates were assigned to serve as discussants in the sessions; they asked questions to probe deeper and provided criticism.

“The one that was assigned to me wrote on the back of my paper and gave me a lot of suggestions on how I could develop it further, and then how I can relate it more to the community,” Smith said.

Frost said interacting with other members of Pi Sigma Alpha was beneficial.

“Since we are such a young organization, it gave us an opportunity to talk to other chapters about membership and things that they planned, fundraising ideas and such just so that we can make our organization better,” Frost said.

“He introduced us to the national network, which connected us to this information and conference. He was instrumental with getting us of the ground,” Smith said.

“It was great for us to get exposure at the conference,” Fuller said. “They were really impressed by Jillian and Greta, and they represented YSU well.”

Fuller said his role as an adviser has diminished since the organization was reinstated in the fall.

“The students have really taken a lead in the organization,” Fuller said. “They have a lot of great things. I have been astounded in how much they have accomplished in a year.”

Smith said attending the conference was good for the chapter and the University.

“It brings us up to the level of academic research that is being engaged in larger institutions than our own,” Smith said.