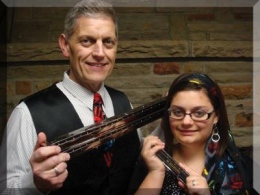 YSU alumnus George Miklas passes on the family tradition of music to his daughter, Janalyn Miklas. George Miklas said music has been in his family’s blood for generations. Photo courtesy of George Miklas.

At the age of 19, George Miklas took a yearlong break from his education at Youngstown State University’s Dana School of Music to tour with Jerry Murad’s Harmonicats, a professional harmonica group.

“Playing the harmonica makes me feel as if I’m removed from what’s going on around me,” Miklas said.

Miklas started playing the harmonica when he was 4 years old. Being a musician ran in his family, and his father taught him how to play the instrument.

“I just concentrate on the music. It’s practically all I think about in my waking moments,” Miklas said. “It’s an obsession because I’ve done it all my life.”

Miklas graduated from the Dana School of Music in 1991. Shortly after graduation, he was asked to perform again with the Harmonicats. He embarked on a coast-to-coast tour.

In 1996, the founder of the Harmonicats, Jerry Murad, died of a heart attack.

“After Jerry died, I stepped back from harmonica performance,” Miklas said.

Miklas said he still played often during this time, but wanted to get married and support a family. So, he got a special education degree at Slippery Rock University and worked in juvenile rehabilitation.

Residing in Mercer, Pa., Miklas continued performing and passing along the harmonica legacy to his daughter.

Then, about a year ago, Miklas met Dr. John Schaman, a respiratory doctor from Ontario, Canada.

Schaman first picked up a harmonica in 2007 after hearing that playing the harmonica could benefit respiratory development for cardiac and asthma patients.

He attended a meeting in 2007 where he learned that between the ages of 30 and 70, it is normal to lose half of your lung function.

“Hearing at this lecture that by the time I was able to lead a normal life, I would lose half of my lung function probably scared me more than it did anyone else in that room,” Schaman said.

He began doing research and gravitated toward the harmonica.

Miklas said the harmonica is a good instrument for the task.

Stephen Gage, director of bands at YSU, said he has seen students with asthma improve their breathing over time.

“I’ve seen marvelous results where students with severe asthma would bring inhalers to practice when they begin in middle school,” Gage said. “By the time I had these students in high school, I didn’t see as many inhalers. … if you think about what you have to do to play a wind instrument, how much compression you have to have your lungs do, it makes sense to me.”

Both techniques are essential to harmonica playing.

Schaman had his patients practice the basics of the harmonica for six minutes a day.

But most of his patients could play only chords on the harmonica rather than single notes, because they had trouble making their mouths small enough to blow into the holes.

With the help of the Seydel harmonica plant in Germany, Schaman developed a medical harmonica that plays four chords, rather than two on the standard harmonica.

“From a medical standpoint, it was important for it to be hygienic,” Schaman said.

Schaman is doing studies in the hopes of providing scientific evidence that playing the instrument helps breathing and lung development.

He said, if nothing else, his patients are having fun and smiling while in therapy.

“My goal is to raise awareness of harmonicas in unusual arenas,” Miklas said.

Miklas said he hopes to see harmonicas being played more often and to get the word out about Schaman’s medical harmonica.