Youngstown State University’s Ward Beecher Planetarium received $650,000 from a NASA grant awarded to Southern Illinois University Edwardsville that will allow them to develop programming for planetariums around the world.

Patrick Durrell, associate professor of astronomy and director of the planetarium, has worked alongside Pamela Gay at SIUE who started CosmoQuest, a citizen science project, in 2012. 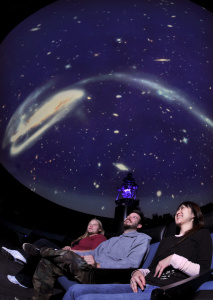 “Basically, citizen science projects are projects that are accessible to everyone,” Durrell said. “You can go online and using real data, you can be part of astronomy. The public can partake in actual resource.”

Gay received $11.5 million over five years from NASA to expand its activities through CosmoQuest, which Gay said will allow anyone who wants to volunteer their time to help explore the universe.

“We are running a virtual research center that is looking to create all of the things that you have at a top real-world research center, but online and designed to engage the public … with people from NASA,” Gay said.

Durrell said the money will enhance a bunch of CosmoQuest projects including moon maps, educational lesson plans and planetarium programming, which is where YSU comes in.

“Planetariums are looking for content, so what we are going to be doing is making some short full dome videos about all these citizen science projects,” Durrell said. “Once we get going, we are going to do computer animation, do some video, get some images from NASA and put it up online for free.”

Gay said they chose Youngstown because they provide content to the public without charging their audience.

“There are a lot of programs out there that are creating high-dollar content that can only be used by other planetariums that have large budgets,” Gay said. “The idea of creating things that we can give away to increase science education is really at the heart of CosmoQuest, and Youngstown was a natural partner to get content out there for the little guy.”

Curt Spivey, planetarium engineer, will be working to make sure the new material is universally accessible. 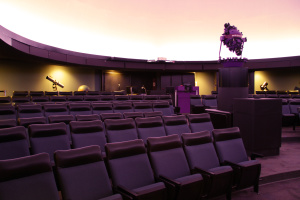 Much of the grant money will go toward improving technology and hiring a new staff member. They will also be hiring another student to work alongside them.

“The new staff member is going to be taking the video that we get … animation, adding it together and basically creating the new videos,” Durrell said.

Spivey said the new technology will help them create the high-quality masters that will work in planetariums with higher resolution projectors.

“The point of this grant is not only to make stuff that we can use, but make sure that other planetariums around the world can use it too,” Spivey said.