Youngstown State University’s PellaPenguins originated during fall of 2014 in the honors college and was named an official organization in 2015. The PellaPenguins is an A cappella singing group that sings in 4-part harmony.

Natalie Halavick, a member of the PellaPenguins, said the group often sings at many events happening on campus, along with sporting events. 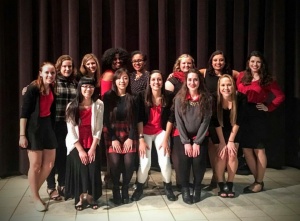 “We’ve performed in the Honors Talent Show, at track meets, the YMCA, the Festival of the Arts and Downtown Youngstown,” said Halavick. “We mostly preform on campus, but we would like to see that expand to the community.”

The group is made up of four sections: soprano I, soprano II, alto I and alto II. When preparing new music for events, the group spends many days working with each section to ensure they have learned the music.

“We usually go through the song once or twice as a whole group, then split into sectionals,” said Langer. “After sectionals, we reconvene and sing the whole song as a group. If there is an issue with the music as a group, we will stop and work through it. We do this for as many days as is necessary to learn the new song.”

Halavick said a strong musical background is not required to become a member of the PellaPenguins.

“To join the PellaPenguins you don’t need any musical background at all, and you don’t need to read sheet music. What we do is easy to pick up,” said Halavick. “Some girls use the sheet music to know the correct words to sing.”

Jessie Pietrasz, vice president of PellaPenguins states the group is made up of students from many different majors and colleges across campus.

“The group of girls is very welcoming, share the same love of music and come from many different academic backgrounds,” said Pietrasz. “We all have different musical experiences. Some girls have been in choir and theater, others have been in the band and other are just girls who love singing. But all the girls work together and work through the songs until everyone gets them.”

To become a member of the PellaPenguins, students can participate in auditions that take place once a semester.

“To be a member of the group, you need to have good intonation. Intonation is the ability to determine if you are singing not only the correct pitch but if your pitch is in tune,” said Langer. “It is also important to blend and balance well with the group; individual voices should not be heard except for solos. In addition to this, you need to be a good team player.”

Joining a student organization is a good way to get involved on campus, and meet new people.

“The PellaPenguins is one of the best things that has happened to me in my three years here at YSU,” said Pietrasz. “Not only are the girls like a second family to me, but I also have gained a new appreciation for music and my confidence has skyrocketed. It forced me to break out of my shell, and I feel like a brand new person because of it.”

If someone is looking to join the PellaPenguins, they are welcome to contact the group on all forms of social media.