The chapter is advised by Adam Fuller, assistant professor of politics and international relations. Fuller said the chapter was inactive for some time, and the award was a great showcase of just how hard the members have been working since reactivating. 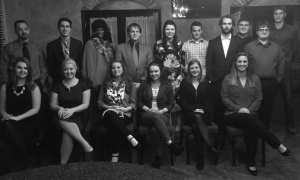 “We didn’t do very much other than induct members,” Fuller said. “but since it’s been relaunched two years ago, the chapter has been told by the national office that we are a model for what Pi Sigma Alpha chapters ought to be like.”

Marissa Snyder, 2017-2018 chapter president, said that leadership played an integral part in the chapter winning two years in a row, especially with help from former president Greta Frost and alumni Jillian Smith, who reactivated the chapter after 15 years of it being inactive.

In conjunction with the rest of her members, Snyder said she was proud of the chapter’s accomplishments.

“I feel incredibly lucky to be president of an honors society that is specific to my particular academic passion,” Snyder said.

Snyder said one of the best aspects of winning the award is to shine some positive light on the political science department.

“We are often an undervalued department, and I’m hopeful that these awards will work to our students’ and faculty’s advantage, as well as a recruiting tool,” Snyder said.

Past events include Pete for Paris to raise money for victims of the terrorist attack in France, Primary Palooza to promote the Ohio primaries, Rock the Vote to encourage students to go out and vote and the screening of “Traficant: The Congressman of Crimetown” documentary.

Dylan Edwards, a student at YSU and member of Pi Sigma Alpha, said making the transition from a spectator and attendee of events to a member has been a rewarding experience.

“Being a part of it is definitely an honor, especially seeing that [the chapter] managed to [win Best Chapter Award] not one, but two years in a row,” Edwards said.

The next upcoming event is a Pete for Texas fundraiser on Sept. 14 at 6 p.m. at Suzie’s Dogs & Drafts in downtown Youngstown.