Every year the conference invites undergraduate Pi Sigma Alpha members to present their work, such as an honors thesis or senior capstones, in front of other members and political science-oriented professionals.

Adam Fuller, Pi Sigma Alpha advisor and assistant professor of politics and international relations, said the selection process for presenters at the conference was “highly competitive.”

“I was told by the selection committee in the national office that it was very difficult to choose which students were selected, so it makes YSU, and particularly our department of politics and international relations, look great nationally to have three of our students chosen to participate,” Fuller said.

He said the conference is a great opportunity for the members to support one another, and students have the opportunity to support engage with each other for support and get suggestions on their work from qualified professionals.

Tabitha Richmond, Pi Sigma Alpha member, presented her paper about the impact that non-governmental organizations (NGOs) have on the Israeli and Palestinian Peace Process. 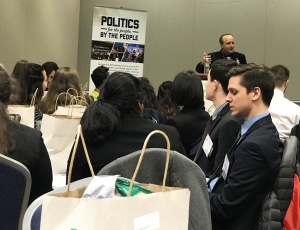 “I became passionate about this topic by working for an NGO where I was able to meet people from the Middle East and hear firsthand of the hardships of growing up in the middle of a conflict zone,” Richmond said.

Richmond explained how she has never previously presented at a national conference, but experiencing the nervousness was worthwhile in order to hear suggestions and advice from professionals about her research.

“Not only was presenting an invaluable experience, the weekend was full of learning from other students on a variety of topics as well as gaining a handful of new networking experiences,” Richmond said. “It was such a motivating and stimulating weekend that I can truly say has helped to reaffirm my career goals.”

“The opportunity to present research papers like this enables our members to represent [YSU] and our Alpha Alpha Rho chapter of Pi Sigma Alpha on the national stage,” Coler said.

Marissa Snyder, Pi Sigma Alpha president, said the paper she presented at the conference was her political science capstone. It discussed the development of privilege against self-incrimination and how the Supreme Court has reduced the right to remain silent during police interrogation.

“These presentations really showcase the quality of our students and our department. If nothing else, they’re a reflection of the caliber of our organization, since we can hold our own against other undergraduate institutions from all over the country,” Snyder said.

“I posit in my paper that in times of economic crisis and cultural upheaval, economic populist movements rise in popularity and begin taking on the rhetoric of extreme cultural movements on their respective sides of the political spectrum,” Edwards said.

He said that presenting in the national conference is an enormous honor. YSU’s chapter of the political science honors society has won best chapter in the nation two years in a row.

“Having three YSU students pursuing research at this conference puts us closer to possibly taking [best chapter award] three years in a row. The award also carries a monetary prize for the club, allowing our organization to do more work here in our community,” Edwards said.