Josh Lewis Photography hosted an individual and group yoga portrait and video event at Stambaugh Auditorium on Feb. 6. The event provided professional photographs for the yoga instructor and enthusiastic participants for their portfolios.

Lewis, who studied graphic design at Youngstown State University, said the event was the first of many collaborations he wants to do, which involves mixing photography with a different medium. 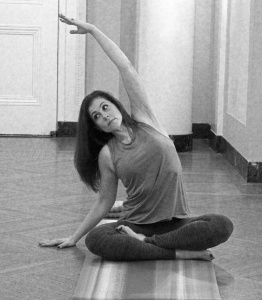 “Not only do I admire the health benefits, spirit and mind, all the good things it does for you,” Lewis said. “In a way, being creative and doing photography does the same things to me.”

Lewis said he wants to mix different things with photography that people would find therapeutic, such as dance, cooking or food. He said this is something in his bones and he likes to be creative.

“I’ve always been artistic,” Lewis said. “It’s what gives me passion in life, it’s what keeps me sane.”

Lewis said for the past several years, he has done a lot of family portraits and industrial photography portraits in abandoned areas. He said he wants to get more people involved in the arts and the creative side of things.

“Yoga is becoming more and more popular especially in the Youngstown area,” Lewis said. “I want to introduce people to photography as well.”

Lewis said one thing he likes to do with his photographs is tell his clients to portray themselves as a story and how they want to present themselves to the world through an image. He said he wants to get more people interested and said will always help his clients get there. 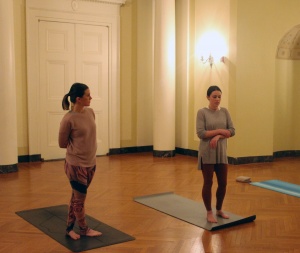 “No matter your skill level, it’s all beneficial,” Lewis said. “Whether it’s for health reasons, whether it’s for your mind and soul, if it helps you reduce stress, yoga offers a lot of benefits, so whether you’re new or seasoned, it’s helpful to everybody.”

Lewis said if people are interested in yoga and photography to just try it and dive right in. He said people should also acquaint themselves with other yoga instructors, photography students or professionals. 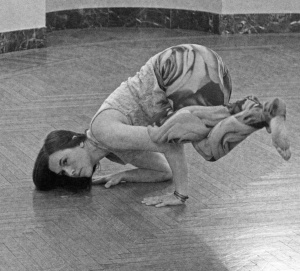 “Practice makes perfect, and when you put yourself into those shoes and just do it every day, it’ll grow,” Lewis said.

Lewis said five of the participants were yoga instructors, some seasoned and some new, and the other participant was a yoga enthusiast.

Jessica Conard, a participant at the event, said she first started coming to yoga with a friend just for exercise. She said she did not expect to get what she got out of it in terms of exercise and the mind.

“It’s such a beautiful practice,” Conard said. “I decided to keep going and become a yoga instructor.”

Conard said she enjoys doing arm balances in yoga and came out to the event wanting to build more connections. She said she has never been to Stambaugh Auditorium and found it very beautiful.

“To have the privilege of doing yoga in a place like this is kind of magical,” Conard said.

Kalli Caras, another participant, said she got into yoga because of two car accidents eight years ago. She said this started her yoga journey in need of wanting to do something more holistic rather than use medication.

“I found yoga as a physical thing, then it turned into a mental thing as well,” Caras said.

Caras said there is nothing she dislikes about yoga and that it saved her life.