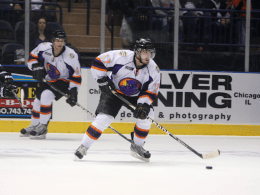 Forward J.T. Stenglein looks to push the puck forward on Saturday against the Sioux City Musketeers. Stenglein recorded two goals on the night as the Youngstown Phantoms improved to 8-2 at home. Photo courtesy of Rob Bindler.

With a 12-5 record, the Youngstown Phantoms sit fourth overall in the United States Hockey League and third in the Eastern Conference. They also have the best home record in the league at 8-2.

“If we’re going to get this program to the place where we want to get this program, which is to be one of the elitist teams in the league, we need to take care of business at home,” said Anthony Noreen, head coach and general manager of the Phantoms.

The Phantoms are looking for their first playoff appearance since joining the USHL in 2009. They finished last in their conference that year and second to last overall with a 20-36 record.

“Last year, we missed the playoffs by a tiebreaker, so you got to get as many points at home as you can,” he said.

Points in hockey are accumulated by wins and overtime games. Teams earn two points for a victory and one for participating in an overtime affair.

The Phantoms, however, are not looking back at the previous two seasons. They are on a four-game winning streak, including wins on Friday and Saturday against the Fargo Force and the Sioux City Musketeers, respectively.

The game stood at 3-3 midway in the third period when Stenglein scored his second goal of the night and ninth on the season to put his team up 4-3.

After the Musketeers pulled their goalie with fewer than two minutes remaining, the Phantoms capitalized with 51 seconds left on forward Ryan Belonger’s second goal to put them ahead 5-3.

Belonger recorded his seventh and eighth goals of the season that night.

The Musketeers, however, did not go away easily.

“Teams like Sioux City are not going to quit,” Stenglein said. “They just came hard right after that.”

Geoff Ferguson hit a clutch shot 17 seconds later to cut the deficit. The goal ricocheted off a Phantom and found the net.

“In between, it was just a battle on both sides,” Noreen said. “For their credit, they didn’t give up.”

The Musketeers pulled their goalie once again for one final push. They got a shot opportunity with two seconds remaining but missed wide right off the goal post.

“The happiest thing about the power play for me, the thing I liked the most was that we kept the momentum on our bench,” Noreen said. “Every time they went out there, we sustained the pressure.”

“That was a hard-fought loss for them,” Noreen said of the Musketeers. “But I thought we worked hard enough to get the win.”

Richard Zehnal was the third Phantom to score in the game. He made his fourth goal of the season with around two minutes remaining in the second period. The Phantoms led, 3-1, at that time.

The Phantoms will end November with a 6-3 record, playing seven of the nine games at home. In December, they will play nine more games but only two at home.

“We got our work cut out for us,” Noreen said.

The Phantoms host the Sioux Falls Stampede on Thursday before traveling to face the Muskegon Lumberjacks on Saturday and Sunday.

They’ll return home to battle the Chicago Steel before playing five straight road games. The Phantoms return to the Covelli Centre on Jan. 5.