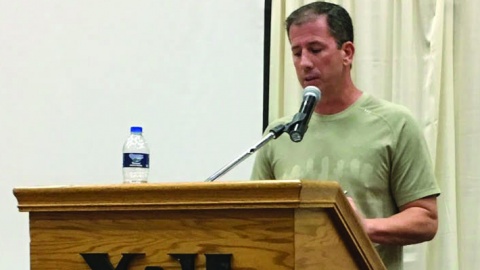 Donaghy may go down as the most infamous name in the history of the NBA. After a decorated 13-year career, his entire world came crashing down in 2006 after the FBI and the NBA found out about his gambling addiction.

Gambling led to him influencing the outcome of games to feed his habit and, eventually, work for organized crime in Philadelphia.

After serving over 15 months in federal prison and a halfway house, Donaghy has become an advocate against gambling addiction. He travels nationally to give speeches about the warning signs of gambling addiction and the consequences his habit had on his career, family and personal safety.

Donaghy said his contract as a referee said he “wasn’t to place a bet of any kind.” But he said it eventually started to consume his life. Later he and a friend realized how easy it would have been to point shave, and how the NBA wanted officials to call the games.

Eventually, he didn’t want to point shave anymore because of the potential repercussions from the league. Any referee caught gambling while employed by the NBA has their contract terminated. But one day he found himself in a car with his friend Thomas Martino and professional gambler James “Baba” Battista.

Donaghy said he and Battista discussed getting out of gambling, but Battista told him he would continue fixing games, because Battista would turn him into the NBA or “have someone visit” his wife and children at their home.

The FBI discovered Donaghy’s connection and eventually convinced him to join the investigation as a cooperating witness. He was sent to a federal prison for a 15-month sentence.

While in prison, he was attacked by an inmate who had connections to organized crime. He needed two surgeries to correct the damage that was done. He was offered protection by an inmate who was serving time for a drug conviction.

He was given the option by his protector to get a tattoo during a 10-day process or shave his head. He opted for the latter. Donaghy said that was the only way he could continue to receive protection.

Eventually, Donaghy was released from prison, but his life was never the same. Donaghy and his wife got a divorce. He said his connection to his two daughters was temporarily ruined but has improved over the last few years.

He said his family and his daughters have kept him from falling back into his gambling addiction.

Donaghy is no longer allowed to be a referee in the NBA. Instead, he said he became involved in real estate after his release. He released a book titled “Personal Foul: A First-Person Account of the Scandal that Rocked the NBA.”

His book is an autobiography discussing his addiction, stories and his impact on the basketball world.

Donaghy said the most upsetting part of the scandal was the potential impact his actions had on the careers of the players that he “screwed.” Donaghy said players’ careers hung in the balance of the calls he made, but he didn’t even consider it while he was officiating games.

He said the one player that stands out in his mind is Rasheed Wallace, a former Detroit Piston forward and center.

He said the reason Wallace sticks out in his mind is because of the way Wallace approached him after Donaghy admitted to fixing games. He said Wallace didn’t hold any resentment toward him, and that made him feel even worse as the time went on.

Because of those emotions, Donaghy stressed the importance of understanding the impact someone’s choices have on other people.

Donaghy said the easiest targets for point shaving and other sports gambling infractions are student-athletes who attend schools like YSU. He said the odds of someone going on to play professional sports from smaller universities is miniscule, and the potential financial benefits of influencing a game for gambling purposes could outweigh the consequences.

Kent-Strollo said there were several candidates for Sunday’s speech, but Donaghy was recommended by one of the co-sponsors of the program.

Donaghy started a question and answer session following his speech. The student-athletes asked questions about his career, why he became involved in gambling in the first place and his experience in rehabilitation.

YSU defensive end Derek Rivers was one of a number of student-athletes in attendance. He said it was an important message for college athletes to hear, and it reminded him of the importance of his role with the university and the football program.

“You reap what you sow. Like coach Bo [Bo Pelini] says, there’s consequences for everything that you do,” Rivers said. “It takes a lot of courage to tell a story like that. The biggest thing I took away from it was that everyone has a conscience. You know when something’s wrong, and you know when something’s right. Sometimes the right way may not be the easy way, but that’s life.”

Kent-Strollo reminded the student-athletes in attendance of the possible consequences of being caught for gambling while enrolled at YSU. She also emphasized the importance of reaching out to the university’s counselling services if a problem ever arises.

“It’s honestly the easiest way to lose your eligibility. There are so many kids out there doing it, and it’s happening everywhere — DI [Division I], DII [Division II], DIII [Division III],” Rivers said. “Like he said, it may not be watched closely by DII and DIII schools, but it’s out there.

“They [YSU athletics] don’t want our students to get involved. Every year, gambling or whether it be someone getting money for signatures or anything like that, it’s an easy way for student-athletes to get caught and lose their eligibility. They’re just looking out for [their] kids.”