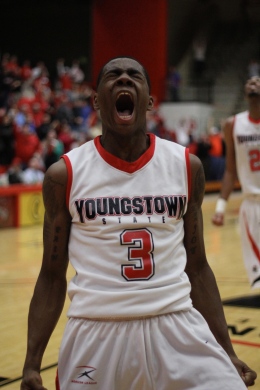 Sophomore guard Kendrick Perry celebrates after the Penguins defeated the University of Wisconsin-Milwaulkee on Jan. 20. Photo by Dustin Livesay/The Jambar

On Monday, sophomore guard Kendrick Perry was honored as the Horizon League Player of the Week, making Youngstown State University the first school in HL history to have all of its starters named player of the week in one season.

Perry said in Monday’s press conference that he was more excited about getting two wins.

“It’s always nice when hard work gets recognized, but I just wanted to do whatever it took for my team to win,” Perry said. “I just tried to stay positive, stay hungry and do anything that was necessary for my team to be successful.”

Head coach Jerry Slocum said he could not be more proud of how his team is competing in the HL.

“All five of those guys have made great strides in fundamentals and their improvements in their game, and they ought to be commended,” Slocum said.

While all five players made history, their next focus is Thursday’s home game against two-time national champion runner-up Butler University.

“They’re a very, very good basketball team,” Slocum said. “Ask Stanford, ask Purdue, ask all of those teams. If you don’t come with your ‘A’ game this week, you’re not going to meet success.”

Before the Bulldogs reached the NCAA National Championship last year, the Penguins were the last team to defeat them.

“There’s always going to be recollections, but it’s a new year,” Perry said. “Butler’s going to come into this game hungry, and we just have to match their intensity.”

The Bulldogs (13-12, 7-6) rank sixth in the conference, but could move to third after this week if everything falls into place.

Following Butler, the Penguins face Valparaiso University at Beeghly Center on Saturday. Slocum said Valpo is the best in the league.

Slocum added that Valpo and YSU have a similar offense.

“I think they’re the only team in the league that can put five guys on the floor like us and can score the ball,” he said.

Slocum added that the Penguins’ eyes are on junior forward Kevin Van Wijk, who is averaging 15.1 points per game (third in the HL). He is first in the HL with a 62 percent field goal percentage.

The Crusaders (17-8, 10-3) rank second in the conference, but the Penguins have a chance of at least a share of second place if they win on Thursday and Saturday, and if the Crusaders do not win this week.

“I think the coaches are aware of it. I don’t think our players care at all,” Slocum said. “If you start thinking

about that stuff and talking about

that stuff as being a priority, things jump up and bite you.