Graffiti is a genre of art people have mixed feelings about. To some, graffiti is looked at in positive ways, but to others, graffiti may come across as detrimental.

Becky Moore, a reference librarian at Youngstown State University, said she is somewhat against this type of art form. However, she said that every day she drives by some specific pieces of graffiti that deliver positive messages.

“I like those positive pieces,” Moore said. “Something that engenders positive feeling.”

Moore said she thinks graffiti is an expression of strong emotion. She said if people are motivated to pick up a can of spray paint and put their thoughts onto something, it’s going to be something they feel strongly about.

Assistant Professor and Foundations Program Coordinator in the Department of Art at YSU, Claudia Berlinski, said the placement and subject of graffiti has to be taken into consideration. She said some graffiti is designed to be vandalism, but other types of graffiti are considered public art.

“I’m not sure why people feel the need to tag things,” Berlinski said. “I think some people just want to be vandals, and then there are other artists who really practice their tagging and create a beautiful signature.”

Berlinski said there is a gray area and a broad range of different kinds of graffiti. She said some kinds can be detrimental to the visual environment, and others can be complementary.

Robert Twomey, an assistant professor in the art department at YSU, said he doesn’t see much graffiti in Youngstown. He said he moved to the area from Seattle, and before that, San Diego, where both cities had active scenes of graffiti. 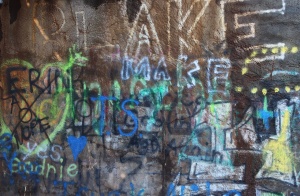 “It raises legal and ethical issues, but can be a meaningful pursuit for someone,” Twomey said.

Louis Zona, the executive director and chief curator at the Butler Institute of American Art, said he’s not a big fan of graffiti. He said for the most part, it’s a way of expressing anger and sometimes hostility.

“I hate to see graffiti written on public buildings,” Zona said. “There is a work of art in New York City in the Metropolitan Museum’s front yard, and there’s this beautiful work by a French artist named Jean Arp, and it has graffiti all over it.”

Although not fond of graffiti, Zona said a number of significant artists started out as graffiti artists. He said these artists had a special talent to make the graffiti more than just spontaneous bits of anger, but rather works of art.

“I’m sure a psychologist would have something to say about what moves a person to want to do a painting on a side of a bridge,” Zona said. “Whether they need attention, whether they are looking for an audience.”

Ann Michelle McMaster, a 2007 YSU alumnus who taught in the art department said she can’t say graffiti is bad, because it’s just a visual expression no different from people standing in the street singing or breakdancing.

“It’s just a different way of expressing themselves,” McMaster said.

McMaster said she personally likes graffiti because the artist wants to say something in a very public way, on a scale reaching a lot of people and creating a shared experience.

“When you do something bold and make a statement with graffiti, you’re forcing people to hear you,” McMaster said. “It’s like shouting.”