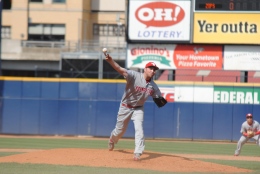 With two outs and runners on first and second base, Youngstown State University sophomore Marcus Heath stepped up to the plate, representing the tying run in the bottom of the ninth inning.

University of Akron senior pitcher Scott Foster delivered a fastball on the inner half of the plate, just where Heath likes it.

Foster turned out to be the happier of the two, as Heath hit a pop-up to the pitcher, ending the Penguins’ hope of a comeback in a 5-2 loss at Canal Park.

“Obviously not the result I wanted,” Heath said. “I saw the pitch I wanted, and I just got under it. I just missed it.”

Rich Pasquale, head baseball coach at YSU, said he had no problem with Heath ‘s swinging at the first pitch.

“We tell our guys we want you to be aggressive in those situations,” Pasquale said. “That guy is on the ropes. I was fine with him swinging at that because that was a pitch he could hit hard. I am all for that.”

Through five innings, YSU freshman pitcher Russ Harless, in his first collegiate start, gave up one run and three hits.

But the sixth inning proved costly for the Penguins and Harless.

The Zips scored four runs on three hits in their half of the sixth inning to break the 1-1 tie.

A bunt down the first baseline by Akron freshman right fielder Joey Havrilak led to a miscommunication by Harless and senior first baseman David Leon, which started the Zips’ rally.

Pasquale said a play like that could extend an inning.

“It is certainly going to do that,” Pasquale said. “David has been playing the last couple of games at first [base] and is still learning the position. The guy has been a middle infielder all his life, and with JB [Jeremy Banks] being out, and he has done a great job.”

“All year, he does a great job attacking hitters,” Pasquale said. “He really has done a great job to come in as a freshman. He has come in all year in some tight spots and minimized the damage and attacks hitters.”

Harless said he just lost his touch in that sixth inning, but felt strong on the mound. He knows he will learn with experience.

“I was just hitting spots, keeping the ball low,” Harless said. “I felt pretty good out there. The more I throw, the more experience I will get, and that will help a lot.”

“He kept them off balance for the first five innings,” Heath said. “He did a great job, so hopefully he can build off that for his next start.”

“We came into today with a lot of confidence,” Heath said. “Akron did a good job keeping us off balance, switching pitchers with different velocities.”

The Penguins are still without Banks in the lineup. Heath said his presence is clearly missed.

“It does hurt us, but we all believe in each other and we do the best

we can,” Heath said. “We still believe we can win without him, but it would be nice to have him back in the lineup, that’s for sure.”