With Youngstown State University’s football team coming off a tough loss to West Virginia University, YSU is looking to improve and get better.

After going into halftime tied 14-14, the Penguins were outscored 27-7 in their 38-21 loss to the Mountaineers. Starting defensive end Derek Rivers spoke about the team’s experience with playing West Virginia.

“It was a very humbling experience. The positive things that we took from West Virginia is that we can compete,” Rivers said. “We see how good our defense can be, and we saw the little things that we have to tighten up. That goes for both offense and defense.” 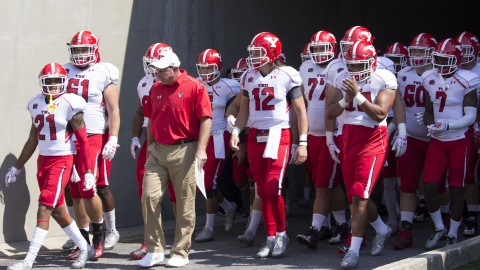 “I think they were confident going into the game. I think they learned some lessons the other day,” Pelini said. “It’s all about us, and the way we do things on the field. We have some things to improve on for sure.”

On Saturday, the Penguins will play Robert Morris University. The Colonials almost upset YSU last season, but the Penguins pulled out a 21-14 win in overtime.

“You go into practice and prepare for Robert Morris just like you would for West Virginia,” Rivers said. “If we can learn to do that, we can prepare for anybody we play. You have to respect everyone you play. Robert Morris has respectable talent that we have to be ready for.”

Starting left tackle Justin Spencer said the team isn’t going to overlook Robert Morris this season and will prepare as if the game will be close again on Saturday.

“I think it’s important to have a really good week of practice. They [Robert Morris] took us to overtime last year,” Spencer said. “We have to come in with a good mental mindset — that this is another game and step toward our goal. We have to prepare for a team that almost came in and beat us.”

YSU’s offensive line hasn’t allowed a sack through the first two games of the season. By this point last year, the Penguins allowed eight sacks — including two against Robert Morris. Spencer also talked about the offensive line play and what they, as a unit, have been able to get done.

“We have to make sure that we play as hard as we can until the whistle blows,” Spencer said. “It’s nice to have a guy like Cameron Fraser, who’s first at almost every position and knows every position like the back of his hand. Communication is a big thing for any group on the field but for the offensive line especially.”

Robert Morris has yet to score an offensive touchdown while only giving up 27 points on defense. Pelini talked about Robert Morris’ offensive struggles and how they will react to that.

“I know they are young on the offensive line,” Pelini said. “Every week gives you an opportunity to improve and get better. We better be ready to play this week, and last year’s game was a perfect example. We need to play well and play better from week to week.”

Rivers said the YSU players “underestimated” Robert Morris last season, and the veterans need to push all the players to practice and play hard this week.

“We didn’t harp on guys about playing hard all the time, no matter who we play,” Rivers said. “That’s on our leadership guys to get that done. It shouldn’t really matter who we play. We determine what we do, so it doesn’t matter who it is. It could be ‘Bama [Alabama], and we would still have to play just as hard.”