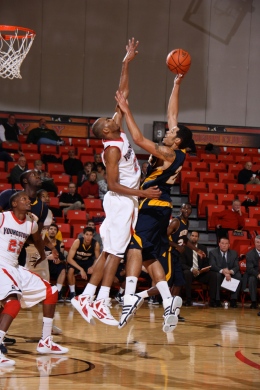 “You have to control the star,” Slocum said. “He’s a really good player, but they’ve got some kids that can complement and shoot the basketball. We’ve got to make sure that we are up for the task physically in terms of being able to execute offensively.”

The Penguins (3-0) travel to face the Nittany Lions on Wednesday. Slocum said the team must be physically and mentally prepared.

“They’re kind of a group that plays half-court defense physically,” Slocum said. “We have a huge challenge ahead of us.”

“They have a very good guard that likes to push it,” Eargle said. “I think that if we get back on defense to stop that guy, we’ll be fine. They’re still a young team too, so I think we can rattle them.”

Eargle finished Friday’s overtime win against the University of California, Riverside, with 11 points, 11 rebounds and eight blocks. He finished two blocks away from becoming the first Penguin to record a triple-double.

Eargle is averaging 13.3 points, nine rebounds and five blocks per game through the first three this season.

The Penguins go against Penn State as the underdog, but Eargle said it’s a good feeling.

“I don’t know who, at our level, would not want to play like that,” Eargle said. “It just excites us more to play this game. I’m sure everybody is excited about it in the locker room too. Our energy is going to be there.”

The Penguins are off to their first 3-0 start since the 2001-2002 season. Along with their win over UCR, they played a close contest against Samford University.

“I think we’ve got kids that are better basketball players, that are really committed, and the time they’ve put in is showing the benefit,” Slocum said. “That’s what you hope for when you get into close games like that.”

After Wednesday’s game, the Penguins will return home for Thanksgiving. YSU will be back on the road on Saturday against Saint Francis University.