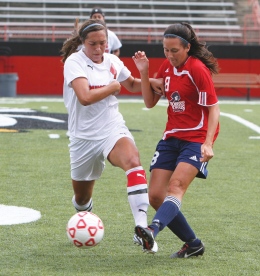 The Youngstown State University women’s soccer team hopes that starting the season with a 2-0 record for the first time since 1999 is a sign of future success for the rest of the year.

It’s just the start of our season, so the big conference games are still yet to come, but they are two W’s against our biggest non-conference rivals,” soccer coach Will Lemke said.

Lemke said he hopes the team can take the energy from the victories to clean some things up.

“We’re still a little bit sloppy,” Lemke said. “We need to stay focused and be consistent.”

Lemke said that execution of the offense and defense is the biggest area of improvement, but also credits his team for offseason work and conditioning.

“The girls have come into this season in shape. They did their own camp before our camp,” Lemke said.

With 31 players on the 2012 squad, it is the biggest roster the YSU soccer program has ever had.

“We are infinitely deeper and more athletic, which alows us to substitute a lot and give ourselves different looks,” Lemke said.

Sophomore Chelsey Haney also said she believes that having a large roster will prove to be beneficial.

“Having a big team enables us to have more practice time with each other, which makes it easier for us to play together during the game,” Haney said.

Lemke, who is now in his fourth year as head coach of the YSU soccer program, said this team is completely different from any other he has had at YSU.

“We are a very youthful team that has to learn to compete at this level, but we have a solid base,” Lemke said.

Haney, who has known Lemke for all four years, credits his coaching style for the team’s improvement.

“He’s hard on us because he wants us to succeed and strive for perfection,” Haney said.

When asked to describe her team with one word, Haney replied, “Determined … as in to make it to the playoffs.”

Junior goalkeeper Ali Viola also has big expectations for this season. She hopes the team can be competitive in conference play and make a run in the conference tournament.

“This is the best team I’ve been on since I’ve been here,” Viola said. Aware of the team that’s around her, Viola also expects this to be her most successful season yet.

“I expect to see improvement in myself, stay healthy and get more shutouts than last season,” Viola said.

Viola is on track to do just that, as she already recorded a shutout in the first game of the season against Duquesne. Lemke said Viola needs to maintain her focus, put games together and work on being more consistent.

While Lemke is cautious not to get overexcited about the successful start to the season, he encourages fans to check out his team.

“We are young but energetic,” he said. “The more people that come, the better, [because] the players feed off of it.”

The Penguins play their home opener Tuesday, as they host the University at Buffalo at 3 p.m. at Stambaugh Stadium.