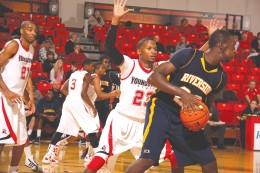 Senior DuShawn Brooks posts up against a University of California, Riverside, opponent on Nov. 18. The Penguins return to Beeghly Center before heading back out on the road. They look for their third home win of the season. Photo by Dustin Livesay/The Jambar.

The men’s basketball team (5-2) begins a five-game, non-conference stretch with the State University of New York at Fredonia (6-1) on Tuesday.

Head men’s basketball coach Jerry Slocum said in a press conference on Monday that the Blue Devils are having a great season thus far, and they’re a dangerous group because of their ability to shoot the 3-point field goal.

“On top of that, you’re coming off of an emotional loss, a loss that you had your last shot of the game at 7 or 8 feet that could’ve gone in,” Slocum said.

The Blue Devils are shooting 39.9 percent from the 3-point line.

“We probably played as hard for two games of 80 minutes of basketball as we played since I’ve been here,” Slocum said. “I mean, we went to Detroit, and we just battled. We went to Wright State, and we just gutted it out and played hard.”

Senior forward DuShawn Brooks said during the weekly press conference that the WSU game was a tough loss. He noted that the Penguins need to look ahead.

“We need to focus on the next opponent instead of coming out being sad about losing by one,” Brooks said. “We had them right in our hands, so I mean we just come in and practice today. We look forward to playing … and moving on from there.”

“You lose by one point. You’re looking at 25 [to] 30 different things that be made differently,” Slocum said. “We’ve got to get ready for a really, really good Division III team that has potential to give you fits.”

The Penguins’ next conference game is Dec. 31 at Cleveland State University.

Slocum said there would be much to learn from this experience.

Slocum also previewed what the Penguins will face, beginning with the Blue Devils’ best start in “15 years.”