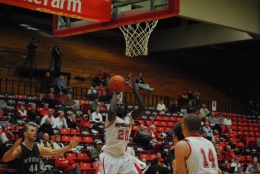 Ashen Ward represents one of two seniors on the Peguins basketball team this season. Despite only having two seniors, Ward said he feels the team has enough experience to take YSU to the next level. Photo by Nick Young/The Jambar.

With just two days before the 2011-2012 season opener for the men’s basketball team, offseason practices and scrimmages will be thrown out the window.

“Samford [University] is kind of a hard game to play because of the fact that they play a different style,” said head coach Jerry Slocum. “We got our hands full for a different kind of a team in terms of the style of play.”

“They do back cuts, and they shoot a lot of [three-pointers], so we have to rebound the ball and play very well defensively,” Ward said. “That’s really our main goal.”

Ward added that this game could help the team compete against Horizon League foes down the road.

“We play who’s on the schedule; that’s the way I look at it,” Ward said. “[If] we can learn something from this game that can help us in our conference, then I’m all for it.”

Going against the Bulldogs requires athleticism, Slocum said, but it may also be a disadvantage.

He added that athleticism helps the defense.

“You just can’t get trapped into coming down and just making one or two passes and launch the [three-pointers],” Slocum said. “You constantly think you’re open all the time because they’re backing off of you the whole time.”

“We’re not different in the fact that we’re going to shoot a lot of [three-pointers],” he said. “We’re going to play in games where we try to push the tempo. We’re probably a little bit too much of a jump-shooting team right now than I would like us to be.”

Slocum said he likes the experience level, even with only two seniors.

“I think our experience has shown,” he said. “I think our backcourt is solid in [junior Blake Allen] and [sophomore Kendrick Perry]. I think our inside game is solid with [junior Damian Eargle] and DuShawn [Brooks].”

“I feel we’ve got that experience,” Ward said. “We’ve got a comfort level both on the floor and with each other.”

The Penguins head to Samford looking for their first road win since Dec. 16, 2009.